5 medals for SA on final day of Masters World Champs 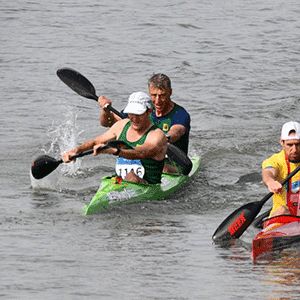 Shaoxing - The South African Masters canoe marathon team added another five K2 medals on day two of the Masters Cup that precedes the start of the ICF Canoe Marathon World Championships in Shaoxing on Tuesday.

Following up the return of four gold medals, four silvers and two bronzes in the singles races, Team SA's age-group paddlers extended their medal tally to fifteen, and in the process inspiring the rest of their senior, Under-23 and junior team mates waiting to start competition later in the week.

In the 45-49 age category Luke Symonds and Ernest van Riet combined to take home the gold medal. It was one of two golds as Colin Wilson and day one gold medallist Nick Oldert picked up the gold in the men's 55-59 age category.

There was one solitary silver medal for Team South Africa on Tuesday, that came from Matt Ballenden and Graham Neate in the men's 45-49 age category race.

The team bagged two bronze medals through Alex Roberts and Loveday Zondi in the sub-vets 35-39 age group and the two Gustav's, Gustav Radloff and Gustav Smook in the men's 50-54 age discrepancy.

The silver medal was particularly special for Zondi, who was forced to abandon his race the day before after damaging the rudder on his kayak.

The focus now shifts to the ICF Canoe Marathon World Championships that get underway on Thursday morning with the Junior K1 races and the senior short course marathons.