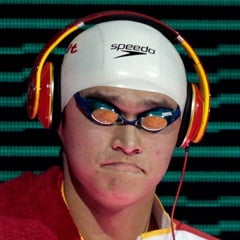 Gwangju - Chinese swim king Sun Yang is no drug cheat and has been the victim of "ill-informed" protests from athletes at the world championships, insists his Australian coach.

Denis Cotterell has worked with the 11-time world champion since the 2008 Beijing Olympics and maintains China's sporting idol is clean, claiming critics are guilty of double standards in casting Sun as the villain.

"He's not a drug cheat," Cotterell told AFP at the world championships in Gwangju, South Korea.

"That's from everything, all my working with him, from the meticulous care he takes with what he ingests - everything I've seen from day dot.

"I don't know if people think he was given a magic pill at birth and it's sustained him for all of these successes," added Cotterell, pointing out Sun is one of the most tested athletes in the sport.

"You can't have the performances he's had over the years without doing the work. The longevity is what determines the difference between champions and super-champions. He's been tested year in, year out - hundreds of tests, winning every year over this period of 10 years."

However, swimmers have vilified Sun in South Korea this week following a leaked FINA doping panel report claiming the triple Olympic gold medallist allowed blood samples to be smashed with a hammer after being visited by testers last year.

Australia's Mack Horton refused to take the podium after losing to Sun in the 400 metres freestyle last weekend before Briton Duncan Scott also snubbed his offer to shake hands after Sun retained his 200m title.

"If he had anything to hide, why would he have even fronted?" asked Cotterell, referring to a test that took place at the athlete's Hangzhou villa in the early hours of September 5 last year.

"Why would he have given blood in the first place? He wasn't home when they arrived - he could've just sat in his car and not fronted until it was registered as a miss."

Sun, who shot to fame at the 2012 London Olympics by winning 400m gold and setting a world record in the 1 500m, was cleared by FINA to compete this week after they agreed testers had failed to follow the correct protocol.

The World Anti-Doping Agency (WADA) appealed that decision to the Court of Arbitration for Sport, who will hear the case in September.

"I absolutely stand with what the athletes want in terms of transparency and regulated, clear doping procedures," insisted Cotterell.

"Who doesn't? And that's China, Sun Yang too. But the way they're doing it - targeting one individual, who's had to endure that for too long - there are other ways," he added.

"I've had great support from coaches across the board here in terms of the fact that this is not the place to make their protests. It's unfortunate for a lot of people that their achievements have been overshadowed."

Horton has history with Sun after the Aussie called him a "drug cheat" at the 2016 Rio Olympics over a three-month suspension Sun previously served after testing positive for trimetazidine, a stimulant that had been added to the banned list four months earlier.

WADA accepted Sun had not intentionally doped and Sun has always maintained it was a prescribed medication to treat a heart problem.

"He was given the wrong advice," said Cotterell, who used to coach Australian great Grant Hackett.

"That's been a convenient catch cry for a lot of people, but it doesn't show a complete knowledge of what happened."

"The executive director of Australian swimming said 'at least he's not a doper' - well he missed three tests," shrugged Cotterell.

"Sun Yang could've got out of this scramble just having one strike and not being silly enough to miss the next two.

"The (Australian) teams I've been on we've had infractions," he added.

"There's honest mistakes, things happen - we on the team and the country never regarded them as drug cheats."

We live in a world where facts and fiction get blurred
In times of uncertainty you need journalism you can trust. For only R75 per month, you have access to a world of in-depth analyses, investigative journalism, top opinions and a range of features. Journalism strengthens democracy. Invest in the future today.
Subscribe to News24
Related Links
Lochte to swim at US nationals after 14-month ban
Dressel at the double as Sun coach blasts world swim protests
Ledecky boosted by Phelps text before punchy return
Next on Sport24
Aussie McKeown smashes world record, Titmus goes close at trials