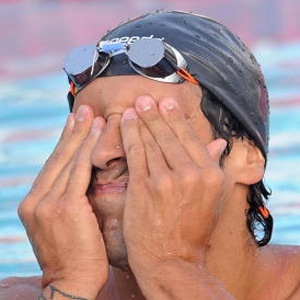 Rome - Former two-time world 100m freestyle champion Filippo Magnini was handed a four-year ban for doping on Tuesday after being found guilty of using or attempting to use banned products, said reports.

Italy's anti-doping agency (Nado) had demanded an eight-year ban for the 2005 and 2007 world champion, who also won Olympic bronze with the 4x200m Italian relay team in Athens (2004).

On Tuesday the 36-year-old Italian, who retired last December, was instead handed a four-year ban.

An investigation into Magnini and fellow swimmer Michele Santucci was opened after criminal proceedings against a rogue nutritionist, Guido Porcellini.

Porcellini was banned for 30 years by the Italian authorities for trafficking doping products and counterfeit medicine.

Magnini's name was found among the evidence, which revealed certain products to be destined for the Italian swimmer, although investigators conceded he may not have used or even received them.

"This sentence has had my name on it for a long time, that's why I'm feeling such anger," said Magnini, whose popularity rose while he was the partner of Italian swimming superstar Federica Pellegrini.

Magnini said he will appeal the four-year ban, a sanction that was also handed to Santucci.

We live in a world where facts and fiction get blurred
In times of uncertainty you need journalism you can trust. For only R75 per month, you have access to a world of in-depth analyses, investigative journalism, top opinions and a range of features. Journalism strengthens democracy. Invest in the future today.
Subscribe to News24
Related Links
SA sea-swim icon Yach, 60, dies
Lochte seeks treatment for alcohol addiction
Cameron van der Burgh relocates to London
Next on Sport24
America's Cup host 'outraged' as Auckland in-city courses ditched