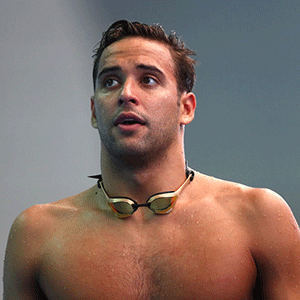 Swimming in the first semi-final out of Lane 5, Le Clos touched the wall in a time of 51.40, behind Hungarian teenager Kristof Milak (50.95).

When all was said and done, Le Clos wound up with the fourth fastest overall time.

The timesheets were led by American superstar Caeleb Dressel who obliterated compatriot Michael Phelps' 10-year-old world record (49.82) when touching the wall in 49.50.

Le Clos took the bronze medal in the 200m butterfly, but scratched from his other two events - the 50m butterfly and the 100m freestyle.

We live in a world where facts and fiction get blurred
In times of uncertainty you need journalism you can trust. For only R75 per month, you have access to a world of in-depth analyses, investigative journalism, top opinions and a range of features. Journalism strengthens democracy. Invest in the future today.
Subscribe to News24
Related Links
Australia's Hackett rubbishes comparison to China's Sun
China swim star Sun 'no drug cheat' - coach
Ledecky boosted by Phelps text before punchy return
Next on Sport24
McGregor, Fenn fast and furious in Freedom Paddle triumph