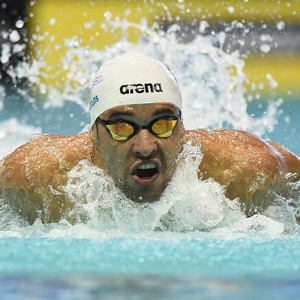 Cape Town - South Africa's Chad le Clos started his title defence with a silver medal on the opening day of the first leg of the FINA World Swimming Cup in Kazan on Friday.

In the men's 100m butterfly, the 26-year-old came in tied for second along with Russia's Igor Kuimov - touching the wall simultaneously at 52.00 seconds.

America's Michael Andrew edged the duo as he won the race in a time of 51.96.

South African compatriot Ryan Coetzee, who won bronze at the Commonwealth Games this year, missed out on a podium position as he finished fourth (52.10).

The men's and women's series winners take home $150 000 each with an additional boost for the each overall cluster winner, who collects $50 000.

The opening leg of the Swimming World Cup in Kazan continues on Saturday and Sunday.

We live in a world where facts and fiction get blurred
In times of uncertainty you need journalism you can trust. For only R75 per month, you have access to a world of in-depth analyses, investigative journalism, top opinions and a range of features. Journalism strengthens democracy. Invest in the future today.
Subscribe to News24
Related Links
Olympic swimmer Coventry named Zimbabwe's sport minister
WATCH: Lewis Pugh completes mammoth channel swim
Saving a life more important than a gold medal - Phelps
Next on Sport24
Aussie McKeown smashes world record, Titmus goes close at trials