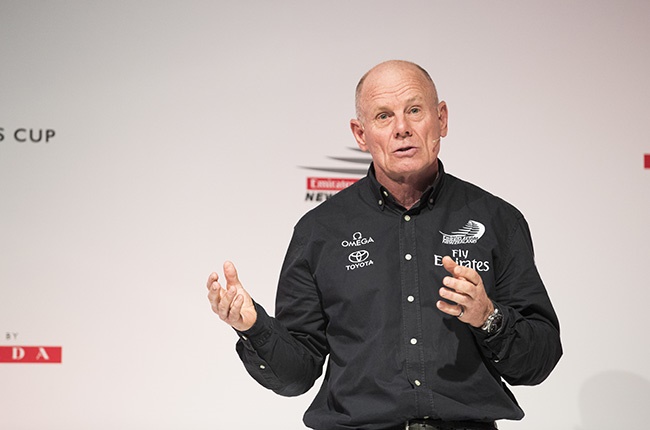 Grant Dalton, CEO of Team New Zealand, attends the 36th America’s Cup Overture as part of the launch for the new protocol of the 36th edition of event in Cowes, United Kingdom on 31 August 2018.
Lloyd Images/Getty Images

New Zealand froze payments to America's Cup organisers on Thursday as officials investigate fraud claims in the lead-up to next year's prestigious yachting regatta in Auckland.

"We are not intending to make further payments to ACE. This will be revisited pending the outcome of the process," the Ministry of Business, Innovation and Employment said in a statement.

The ministry has previously said it was investigating "structural and financial matters" surrounding the organisation of the race but provided no further details.

ACE is a subsidiary of Team New Zealand (TNZ), the racing syndicate who won hosting rights for the 2021 America's Cup when it triumphed in Bermuda in 2017.

TNZ managing director Grant Dalton has repeatedly denied any wrongdoing and complained this week about his organisation being infiltrated by spies.

After the government's announcement, TNZ said it had no problem with funds being suspended.

"ACE and Emirates Team New Zealand in fact support the government in holding funds until the process is complete and we have closed out all issues," it tweeted.

The New Zealand Herald said late Thursday that TNZ's lawyers had obtained a gag order from the High Court preventing it from publishing the findings of an interim report into event finances.

The MBIE statement revealed that the government was withholding NZ$11 million ($7.2 million), part of a NZ$40 million ($26 million) "hosting fee" paid to ACE.

The government and Auckland Council have poured a combined total of around NZ$250 million ($163 million) into the America's Cup, which dates back to 1851.

A letter from government officials leaked to the Herald this week said concerns included a NZ$3 million ($1.95 million) loan to TNZ that was "reclassified" for other purposes and the fraudulent transfer of funds to a Hungarian bank account.

Other issues cited in the letter included an unwillingness to provide information and "poor governance, including suggestions that records should be retrospectively amended".

Dalton has downplayed the claims, dismissing the loan classification as an accounting issue and saying the Hungarian transfer occurred after TNZ fell victim to online scammers.

He said the transfer did not involve public money and police were immediately called in, subsequently recovering some of the funds.

The issues emerged this week when Dalton revealed he had fired a number of employees for leaking confidential information, although he refused to say how many were involved, or speculate on their motives.

Media outlet Newshub said it was told by the sacked employees that they were local contractors who regarded themselves as whistleblowers, not spies.

Auckland mayor Phil Goff said on Thursday he was confident the controversy would not derail preparations for the regatta.

"While I regret this situation has arisen, when it did arise you have no option but to deal with it with integrity and transparency. That's what's being done," he told Radio New Zealand.