Schoenmaker braces for a icy plunge to get back into training 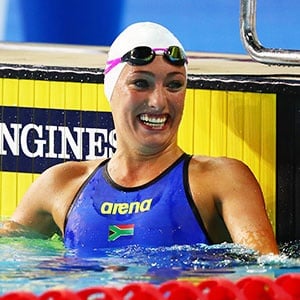 Tatjana Schoenmaker has not been idle in the three weeks she has been building up the courage to take that a heroic comeback plunge in what certainly is going to be an icy experience.

While "stranded on land" she has been relearning how to evaluate a function, identify linear functions, wrote equations etc.

Since doing maths is not exactly everyone's favourite past time. Getting to solve problems, however, is a way for Schoenmaker to relax and pass the time during the national lockdown.

It is not the main reason why she is playing around with numbers and formulas. She is helping the son of the domestic worker while he is doing online education. Being a part-time tutor is quite a rewarding experience. The ultimate challenge would be if she could get her student to enjoy mastering maths.

Schoenmaker must keep her mind active. The past four years, it has not always been easy to do so as she was training to beat the world's best in the pool. Most days she has been at it for six hours resulting in her still studying during the early hours of the morning.

Being so disciplined had its consequences. Most students end up having fond memories of their carefree days before having to face up to real life challenges. For Schoenmaker, such memories do not exist. According to her, she had no social life.

Still, she persevered and reaped the award. The Tuks swimmer has completed her BCom financial science studies while she also established herself as one of the world’s best breaststroke swimmers.

Schoenmaker was responsible for one of the most significant breakthroughs in South African women's sport last year when she won a silver medal in the 200m breaststroke during the World Championships in Korea. She is the first local female swimmer to medal at a world long course championship (50m). It led to her deservedly winning the 2019 South African Sportswoman of Year-award as well as the South African Sports Star of the Year.

Needless to say, Schoenmaker has no regrets about being a Tuks student and an international swimmer.

"If I could have the past four years over again, I would choose to do precisely the same. I have had some fantastic experiences and met incredible people."

Schoenmaker is already contemplating as to what she wants to study next year. Quantity surveying seems to her an interesting option, but because the Tokyo Olympic Games has been postponed until next year, she might put the idea on hold for now.

Since the lockdown started, Schoenmaker has not been in the pool once. Part of the reason is that she has been allowed to take a break. All good things, however, do come to an end.

"I know I need to get to start swimming, but I have not yet found the courage to do so as the water in the pool is icy cold."

If her courage did not forsake her Schoenmaker would have dived in this morning to start preparing for next year's Tokyo Games.

We live in a world where facts and fiction get blurred
In times of uncertainty you need journalism you can trust. For only R75 per month, you have access to a world of in-depth analyses, investigative journalism, top opinions and a range of features. Journalism strengthens democracy. Invest in the future today.
Subscribe to News24
Related Links
WATCH | On his birthday, relive one of Chad le Clos' - and SA's - greatest ever sporting moments
Swim star Peaty adjusts to life with no pool
20 quickfire questions with ... Cameron van der Burgh
Next on Sport24
America's Cup host 'outraged' as Auckland in-city courses ditched