“We can confirm that the province have agreed to the release of Marnitz Boshoff from the remaining year of his contract on compassionate grounds. Boshoff, who is currently in South Africa, requested to return home to be closer to his family after the sudden and tragic passing of his father earlier this year. We would like to wish Marnitz and his family all the very best for the future and thank him for the contribution he made during his time here,” Connacht Rugby posted on their official website.

Having joined Connacht from the Lions last October, Boshoff made his debut against the Cardiff Blues in November but injured his shoulder in his second appearance against Benetton Treviso.

Boshoff, who played one Test for the Springboks in 2014, returned to the fold late in the season to make two further appearances and played his final game for Connacht away to Munster in May.

Commenting on his departure, the 28-year-old Boshoff said:

“I would like to thank Connacht Rugby for agreeing to my request to be released from the final year of my contract after what has been a difficult season for me both on and off the field. During my time with the province I have experienced first-hand the unique sense of pride and community that exists throughout the province.

“There is an incredible group of players representing Connacht and I am proud to say I was part of this group. I have learned hugely from both players and management over the past season and this experience will have a positive impact on my career in the future.

“I would also like to thank the Connacht supporters who have been incredible when I represented them on the field and with their personal good wishes off the field. I wish Connacht every success in the future.”

We live in a world where facts and fiction get blurred
In times of uncertainty you need journalism you can trust. For only R75 per month, you have access to a world of in-depth analyses, investigative journalism, top opinions and a range of features. Journalism strengthens democracy. Invest in the future today.
Subscribe to News24
Related Links
Sharks change 2 for Griquas clash
Jet-lag fears for Crusaders in Ellis Park final
Rugby law amendments to be trialled in SA
Next on Sport24
Decision to boot Cheetahs from PRO14 is fuelling their Super Rugby Unlocked charge 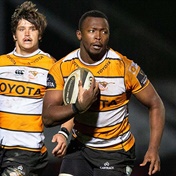