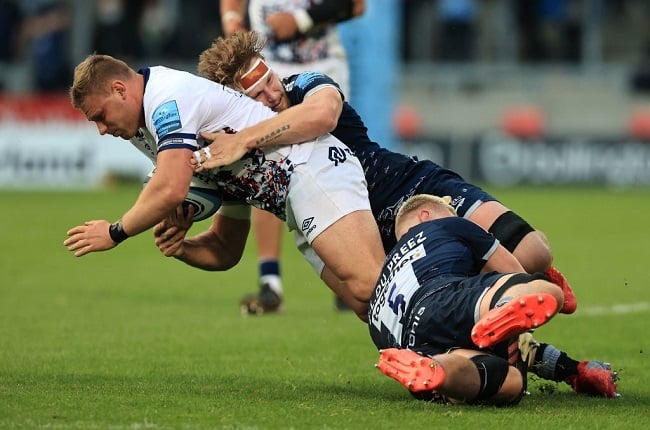 The Du Preez twins tackle an opponent together. (Photo by David Rogers/Getty Images)

If ever there were bigger "victims" of South African rugby's seemingly ever-lasting depth at flank, it's the Du Preez twins - Jean-Luc and Dan.

The siblings combined have just over a dozen Springbok caps between them, but the fact that both have played themselves back into international contention for the upcoming series against the British & Irish Lions attests to their determination and improvement.

In fact, Deon Davids, the Boks' forwards coach, subtly suggested that the marauding yet gifted enforcers have belatedly realised their already immense potential since moving to English giants Sale Sharks.

"I was privileged to work with both Jean-Luc and Dan when they were national under-20 players and they were already quality rugby players then," he said from the national team's camp in Bloemfontein.

"They are both good lineout forwards and strong ball carriers, they give you momentum and they are also good at stopping the opposition team's momentum."

But weekly exposure to the best in the English Premiership and Europe has clearly elevated the Du Preezs, particularly Jean-Luc, who's become a bolter in the second row.

"I think in Europe the experience of playing against quality international players week in and week out has really grown both of them," said Davids.

"They grew a lot in the sense of getting themselves involved in lots of battles around the park. In terms of execution, they both have very high work rates and there is a lot of versatility available in terms of how they are used in the lineouts.

"That brings an extra dimension that could be invaluable to us. It is fantastic to see them making that step up and now playing to their ability."

Dan's vast experience at eighthman becomes eminently more useful given the doubts over Duane Vermeulen's availability and it's obvious that Jean-Luc, who has been officially labelled a utility forward, is a contingency plan if the group of locks remain on the sidelines.

However, versatility is an overall theme associated with the composition of the group of forwards and the twins will still have their work cut out for spots in a match-day 23.

"It will be useful to have players like that to call on if there are injuries at lock. I suppose, in terms of that, the biggest challenge might come when we have problems with guys who run the lineout.

"If Lood de Jager is not available, we will need guys like Franco Mostert, Nicolaas Janse van Rensburg and Marvin Orie to step in.

"But obviously with the Du Preez twins and Rynhardt Elstadt we have players who can do a good job if asked to step into the No 4 lock role and it is really useful to have guys like that in the squad."

We live in a world where facts and fiction get blurred
In times of uncertainty you need journalism you can trust. For only R75 per month, you have access to a world of in-depth analyses, investigative journalism, top opinions and a range of features. Journalism strengthens democracy. Invest in the future today.
Subscribe to News24
Next on Sport24
FULL-TIME | Springboks 17-22 British & Irish Lions, 1st Test