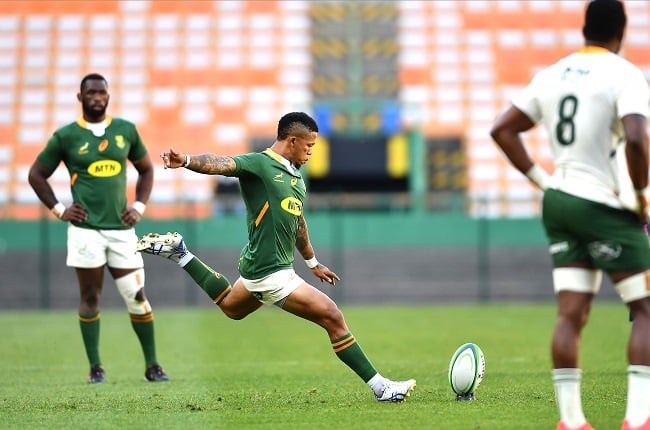 Elton Jantjies in action for the Springbok Green team in the Springbok Showdown match against Springbok Gold at Newlands on 3 October 2020. (Photo by Ashley Vlotman/Gallo Images)

South Africa's Rugby World Cup winner Elton Jantjies said his desire to feature against the British and Irish Lions was behind his move to French stugglers Pau.

Jantjies, 30, who made the last of his 37 Test appearances during 2019's Webb Ellis trophy success, last week announced he will join the Top 14 outfit on a short-term deal until the end of the season.

The Lions will head to South Africa in July for five warm-up matches with the final of three Tests on 7 August.

"It's a massive motivation. It comes every 12 years, it only comes once or maybe twice in a career. It's something as a schoolboy you dream of," he told AFP after arriving in south-west France on Saturday.

Jantjies will be competing with first-choice flyhalf Handre Pollard, who has been out since September with a serious knee injury, for a starting berth later this year.

The pair could face each other for in early June during the last game of the regular French season with Pollard's Montpellier heading to Stade du Hameau.

"We need 'Polly' in the squad. I spoke to him a few days ago with me coming to France. It will be good to be in the squad with him for the British and Irish Lions," said Jantjies, who played in two World Cup pool games for the Boks in Japan: the 57-3 victory over Namibia and 66-7 thrashing of Canada.

"Hopefully I'll see him over the next few weeks playing for his club and then the Springboks.

"I'm not an individual-based guy. I have to reach my own individual standards and it makes me happy. If I perform well for Pau and during the Springbok preparation the jersey is in the coaches' hands."

Jantjies, who plays for the Lions in his home country, will miss the franchise's first involvement in the PRO14 with the Rainbow Cup starting this weekend.

The former Baby Boks playmaker said the move to Pau was no slight on the new tournament.

"It was something I discussed with the Springbok and Lions management and it was a good opportunity for me. Playing in the Top 14 is something I'm really looking forward to in preparation for the British and Irish Lions," he said.

"It is to give myself a big challenge for that big tour. It's nothing against the Rainbow Cup or anything in South Africa," he added.

Jantjies will be forced to wait until 8 May for his Pau debut as he will undertake a week-long isolation due to the French government's Covid-19 guidelines.

Despite the rules the president Bernard Pontneau told newspaper L'Equipe he was eager to have an exemption for Jantjies.

The three-time French champions are in the relegation play-off spot, three points below Bayonne in 12th place with five matches of the season to go.

Apart from Montpellier, Jantjies can look forward to running out against already-relegated Agen before taking on the might of Top 14 giants Racing 92 and La Rochelle.

"The situation the club is in is one of the challenges I'm really looking forward to. Hopefully we can achieve what we want to achieve," he said.

"There are a few adjustments. We had a year lockdown and I learnt a lot.

"I've got some things up my sleeve. I have some daily programmes to do. Then next week hopefully hit the ground running."

We live in a world where facts and fiction get blurred
In times of uncertainty you need journalism you can trust. For only R75 per month, you have access to a world of in-depth analyses, investigative journalism, top opinions and a range of features. Journalism strengthens democracy. Invest in the future today.
Subscribe to News24
Next on Sport24
Former British and Irish Lions star backs SA-born winger Duhan van der Merwe to make Test impact