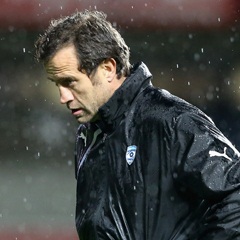 Paris - This weekend is the last round of Top 14 matches before France's new head coach Fabien Galthie names his squad on January 8 for the upcoming Six Nations.

Former captain Galthie, 50, who replaced Jacques Brunel after the Rugby World Cup quarter-final exit, will be looking to claim a first title win in the annual tournament since 2010.

A look at some of the names playing for their places in the 42-man group before les Bleus' opening game of the competition against World Cup runners up England in a month's time.

Hooker Guilhem Guirado retired from Test rugby following the World Cup quarter-final defeat after wearing the captain's armband for four years. Galthie has said he will refrain from naming a long-term replacement for Guirado and will use the tournament as a test. Loosehead prop Jefferson Poirot led les Blues in the rare absences of Guirado during 2019 and others also linked with the job include Toulon back-rower Charles Ollivon and Toulouse pair Julien Marchand and Antoine Dupont.

In one of the picks of this weekend's matches in the French top-flight Racing 92 welcome Clermont on Saturday with a host of individuals all but sure of their place in the squad expected to feature.

Among the backs, in-form centre Virimi Vakatawa could come up against the likes of Alivereti Raka and Damian Penaud, who was suspended for last Sunday's victory over Castres by coach Franck Azema due to the winger's poor attitude.

On Sunday, bottom-side Stade Francais play Toulouse in French rugby's Clasico with not just places in Galthie's squad up for grabs but potentially one in his starting line-up.

Gael Fickou and Sofiane Guitoune are set to feature at outside centre for their respective sides at Stade Jean-Bouin with an early chance to claim a stake to join Vakatawa in midfield.

After lock Sebastien Vahaamahina hung up his boots following the World Cup, where he was red-carded and subsequently banned for elbowing Wales' Aaron Wainwright, Galthie could call on the likes of Lyon youngster Felix Lambey, South African-born Paul Willemse or veteran Yoann Maestri for a return to the international set-up.

France's U20s side has won the past two editions of the junior World Cup and Bordeaux-Begles back-rower Cameron Woki and Toulon flyhalf Louis Carbonel could follow in the footsteps of fellow former trophy winners Romain Ntamack and Demba Bamba by being given opportunities at senior level.

At the other end of the age scale 27-year-old Montpellier fullback Anthony Bouthier has been impressive during his first few months in the top-tier after five years in ProD2.

We live in a world where facts and fiction get blurred
In times of uncertainty you need journalism you can trust. For only R75 per month, you have access to a world of in-depth analyses, investigative journalism, top opinions and a range of features. Journalism strengthens democracy. Invest in the future today.
Subscribe to News24
Related Links
England star Williams hit with 2-week ban
Fijian star Nakarawa rejoins Glasgow Warriors
Ex-All Blacks coach now Sir Stephen Hansen, but insists he's still Steve
Next on Sport24
British & Irish Lions to explore potential women's team