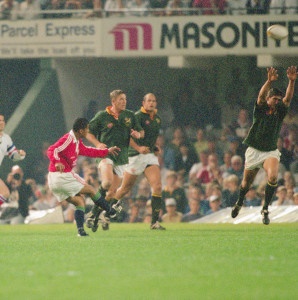 A British and Irish Lions tour is one of most anticipated in World Rugby.

In 1997, just five years after the Springboks returned to international rugby post-isolation, the Lions arrived on South African shores for the first time since 1980.

Back then, Bill Beaumont's men had suffered a 3-1 defeat at the hands of the Springboks who atoned for their 1974 series drubbing to the men from the British Isles by the same margin.

And in '97, the Springboks, a team that just two years earlier had won the Rugby World Cup, were expected to easily deal with Martin Johnson's side.

But with rugby now firmly entering the professional era, the Lions were well prepared by wily Scottish coach, Ian McGeechan and included some formidable names in their line-up.

Johnson was an obvious standout at lock and would go on to captain England to victory at the 2003 Rugby World Cup. The backrow picked for the first two Tests was an all-English affair in the form of hardman Richard Hill, as well as Tim Rodber and Lawrence Dallaglio.

At centre, the silky Englishman Jeremy Guscott wore 12 while outside him, Welshman Scott Gibbs, a recruit from Rugby League, combined ferocious defence with the ability to cross the gain line almost at will.

McGeechan also sprung a surprise with his choice of fullback in Welshman, Neil Jenkins, one of the best goal-kickers in international rugby, but normally a flyhalf.

By playing Jenkins at 15, McGeechan could slot Gregor Townsend in at 10. Townsend, a pivot with excellent distribution skills, would help bring the outside backs into play while Jenkins would punish any Springbok indiscretions with his accurate kicking.

With the series to be decided over three matches, the first Test at Newlands was crucial. And it was the Lions who drew first blood, taking a 25-16 win thanks to two late tries from scrumhalf Matt Dawson and wing, Alan Tait.

Dawson's try saw the English scrumhalf break to the blindside from a scrum and throw an audacious overhead dummy that fooled four Springbok defenders. Jenkins' accurate boot also played a critical part in the triumph with the Welshman landing five of his six penalty attempts at goal.

With the series on the line, Du Plessis made changes to the Springbok backline for the second Test in Durban. That saw Percy Montgomery, who was making his Test debut, start at outside centre along with another debutant Pieter Rossouw on the left wing.

South Africa managed to outscore the Lions by three tries to zero with Van der Westhuizen, Montgomery and Joubert crossing the whitewash. Sadly for the hosts, Montgomery left his kicking boots at home while Jenkins slotted five penalties to keep the Lions in the match.

With the score tied at 15-15 and with just four minutes left on the Kings Park stadium clock, a moment of brilliance saw the Lions snatch a historic win.

And it was Guscott that wrote his name into Lions folklore with a snap drop goal from in front of the posts that won the game 18-15 to secure a series victory.

While the hosts went onto record a consolation 35-16 win in the third Test, the Lions had claimed the scalp of the world champions and it would be 12 long years before South Africa got their revenge.

We live in a world where facts and fiction get blurred
In times of uncertainty you need journalism you can trust. For only R75 per month, you have access to a world of in-depth analyses, investigative journalism, top opinions and a range of features. Journalism strengthens democracy. Invest in the future today.
Subscribe to News24
Related Links
4 Boks make Super Rugby's away from home 'Team of the Decade'
Coronavirus the final nail in SA's Super Rugby coffin?
Jake White believes perceptions of him don’t tell the whole story
Next on Sport24
Bok centre reveals his great-grandfather was a British Lion