Pollard defends Boks' 'boring' style: 'It's the most beautiful thing after my wife' 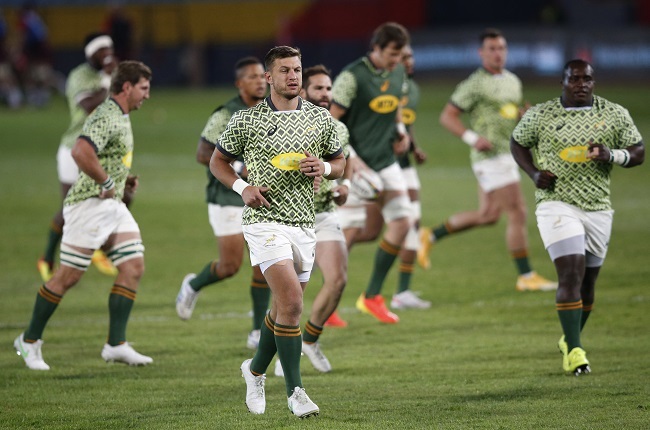 The Springboks' power-driven, pragmatic style of play will always have its critics, but there's no bigger believer in it than Handre Pollard, the man who needs to manage it.

To him, it's one of the most beautiful things in the world.

The hoary issue reared its head again last weekend when Peter de Villiers, national coach in 2009 when the Boks beat the British & Irish Lions 2-1 in a memorable series, told the Daily Mail that when the men in Green-and-Gold play, it's "very, very boring" to watch.

To be fair, the outspoken 63-year-old admitted that the template is effective.

Quizzed on that perception, Pollard was unashamedly unapologetic.

"Why do we accept playing like that? It's the way we've been brought up," the Bok flyhalf said with a wide grin.

"To me, it's the most beautiful thing ... apart from my wife. That's the way we play. Throwing the ball around is nice for people watching on TV, but to me the way we play as the Springboks is a thing of beauty."

Ironically, it was De Villiers' imposing vintage of 12 years ago, who actually played a very similar brand, that convinced Pollard of the virtues of South African rugby.

One man in particular, a certain Morne Steyn, played a major part.

"I was about 15 years old when that series took place and the memories like Morne's series-winning penalty in the second Test at Loftus are amazing," said Pollard.

"I believe many young South Africans that were the same age as me fell in love with South African rugby after that. It definitely convinced me to aim to play rugby at the highest level.

"I've been very fortunate to have played alongside some of those heroes. Hopefully we can create similar memories in this series."

Talking of Steyn, Pollard expressed his admiration for the evergreen 37-year-old flyhalf.

"To have him back in the national setup is amazing. Morne's one of the best guys you'll ever meet in rugby," he said.

"His attitude is just so professional, even at his age. I honestly don't think I'd be able to play the game if I reach his age.

"He just always wants what's best for the team. He's seen it all during his career, it's great to have him back."