Rassie goes from head coach to water boy on Bok return: 'We're always a little outside the box' 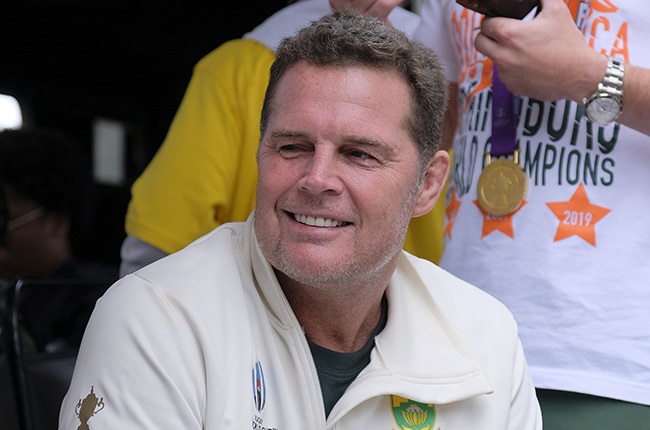 Any thoughts of Rassie Erasmus taking a back seat in the running of the national team were well and truly extinguished on Friday as the Springbok director of rugby operated as a water boy during South Africa's 40-9 win over Georgia at Loftus.

Having stepped down as head coach after winning the 2019 Rugby World Cup, Erasmus has moved into a director of rugby role with Jacques Nienaber taking the reins as head coach.

On Friday, though, the television cameras caught Erasmus - wearing a cap, mask and bib - on the field and communicating with the South African players, particularly skipper Siya Kolisi.

It was a role filled by Nienaber in 2019 during the World Cup when he was assistant coach, but also the side's on-field physiotherapist.

"It was nice for me in terms of being able to chat with Rassie and him giving me feedback from the players and running water on the side," said Nienaber after the match.

"Hats off to him for wanting to do that.

"Myself and Rassie always work a little bit out of the box.

"Obviously I can't be on the side of the field ... so hopefully he makes himself available for the next game as well."

Appointed all the way back in January 2020, Nienaber said it was "fantastic" to finally have his first Test as coach done and dusted.

The Springboks will take on Georgia again this coming Friday at Ellis Park before their series against the British & Irish Lions gets underway at Cape Town Stadium on 24 July.

Rassie the most overqualified waterboy in rugby history…