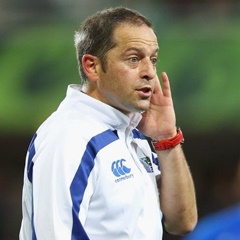 Kaplan, who refereed 70 Tests (second behind Nigel Owens) and was involved in 18 involving the All Blacks, has called on the officials to be vigilant of ‘questionable’ tactics employed by the New Zealanders.

Kaplan expressed his views via a column for The Telegraph, writing: “New Zealand are masters of the subtle nuances, which often determine the difference between winning and losing. They often flood the breakdown with numbers when there appears to be a numerical mismatch, some of it not always legal."

This leads to turnovers - which the Kiwi teams thrive of.

Highlighting further aspects for referees to look out for, Kaplan continued: “One questionable tactic which one sees periodically is the killing of quality ball after a linebreak or close to the goal-line. Referees often - but not always - pick up the infringement, but then fail to recognise that it is cynical and often designed not to allow the possible try.

“One of the more nefarious tactics used is the clearing of opponents who are not taking part in the ruck or post-tackle situation. It happens consistently every week down south - and with all southern hemisphere international sides, especially New Zealand - and it is a tactic referees are very poor at picking up.

“It appears that there is either a lack of will or lack of quality personnel to deal with these on-field indiscretions. It causes a huge amount of frustration for the non-offending team, who are trying to defend legally and often leads to retaliation as a result. Teams get away with it quite often and hence some big holes are opened up for the attack to exploit.”

Ahead of the Lions-All Blacks series, Kaplan said there will be lots of pressure on the officials to get it right.

South Africa’s Jaco Peyper will be in charge of the first Test at Eden Park in Auckland on June 24, while two French referees will handle the final two internationals.

Jerome Garces will be the man in the middle for the second Test in Wellington on July 1, with Romain Poite in control for the series finale in Auckland a week later (July 8).

Apart from the three Tests, the Lions will also play seven tour matches - against all five of New Zealand's Super Rugby franchises, as well as matches against the New Zealand Provincial Barbarians and Maori All Blacks.

CLICK HERE to read Kaplan's full column for The Telegraph

We live in a world where facts and fiction get blurred
In times of uncertainty you need journalism you can trust. For only R75 per month, you have access to a world of in-depth analyses, investigative journalism, top opinions and a range of features. Journalism strengthens democracy. Invest in the future today.
Subscribe to News24
Related Links
WRAP: Super Rugby - Round 15
Paige 'luckiest' to be in Bok squad
Cheetahs deny 'official' invite to join Pro12
Next on Sport24
Pichot wants to put Lions on global stage