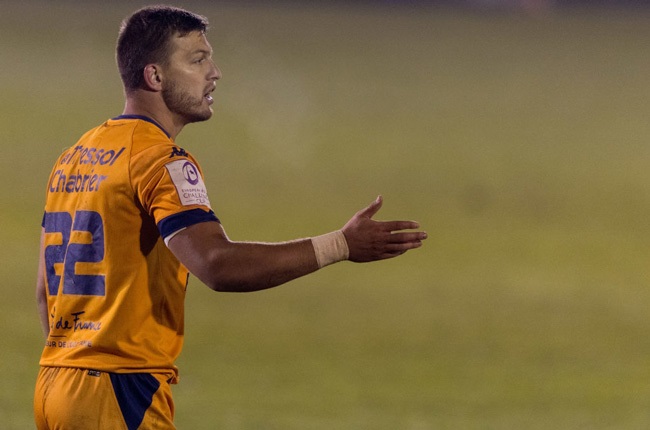 Scrumhalf Benoit Paillaugue said the bonus point was "the cherry on the cake" as Handre Pollard's Montpellier edged closer to safety in the French Top 14 with Tuesday's 29-10 home win over Toulon.

South Africa's Rugby World Cup winner Pollard watched on from the stands as he continues his recovery from a serious knee injury and his outfit moved 10 points clear of Bayonne in the relegation play-off spot.

"It's cool. It's a bit difficult to play two matches like that. The aim was to win, but to win with the bonus point is the cherry on the cake," Paillaugue told Canal+.

"It's promising for what's to come. We also have a European final, which can give light to a dark season," he added.

The fixture, as well as Brive's crucial 24-12 victory over La Rochelle, earlier in the day had been rescheduled from last month due to Covid-19 cases.

Toulon, who welcomed Pollard's Test team-mate Eben Etzebeth back after six weeks out with a finger injury, missed out on the chance to move into third.

Pollard, who made his return from an anterior cruciate ligament tear against Bath on 1 May, could feature at Stade Francais on Saturday to make his first start since September's injury.

Earlier, Brive head coach Jeremy Davidson said Fijian back-rower Kitione Kamikamica's two tries in the success over second-string La Rochelle had done the "majority of the job" of keeping their place in the top-flight.

"Safety is not guaranteed. We've done the majority of the job, but there is still three matches left," Davidson said.

"It's a positive result, even if it wasn't a first-choice La Rochelle team," he added.

The visitors continued to rest players ahead of the Champions Cup final on May 22 with three fixtures in 12 days.

Gibbes, who will leave the club at the end of the season for Clermont, also named five academy members in his run-on side.

The game turned on its head as La Rochelle were shown two yellow cards, to captain Wiaan Liebenberg and teenage debutant Thomas Ployet after half an hour.

Brive were awarded a penalty try and former Fiji U20s loose forward Kamikamica crashed over for his first before Plisson closed the gap to 17-9 at the break.

Plisson added a fourth shot at goal before missing two efforts before 25-year-old Kamikamica claimed his double on the hour mark and the bonus point for the former European Cup winners.

We live in a world where facts and fiction get blurred
In times of uncertainty you need journalism you can trust. For only R75 per month, you have access to a world of in-depth analyses, investigative journalism, top opinions and a range of features. Journalism strengthens democracy. Invest in the future today.
Subscribe to News24
Next on Sport24
Referee Ben O'Keeffe's performance: Consistent ... in a weird, rugby way