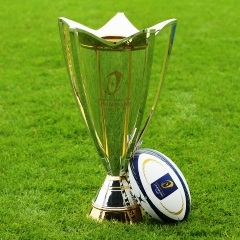 Paris - Ireland's John Cooney scored 19 points in another impressive display as Ulster moved six points clear at the top of Pool 3 in the European Champions Cup with a 34-10 victory over Harlequins on Friday.

Scrumhalf Cooney, 29, who has eight Test appearances but missed out on Rugby World Cup selection, crossed twice either side of the interval as the Irish province remain unbeaten in the tournament ahead of the final two rounds of action in January.

On Sunday, a Clermont victory over bottom side Bath would further Dan McFarland's outfit's claims for a last-eight spot.

"I'm happy with the way it's going at the moment. We showed a lot of desire," Cooney told broadcasters BT Sport.

"We're taking those opportunities and it's a reflection of the way we're trying to play," he added.

Despite dominating the opening 35 minutes, the Irish province only had a 3-0 advantage thanks to a Cooney three-pointer.

Quins centre James Lang responded with a penalty of his own before Cooney scored his first try of the proceedings in drizzling west London rain.

Flyhalf Billy Burns broke from his own 22 metre line and the ball eventually ended up with Cooney after coming through the hands of Jacob Stockdale and Matt Faddes and Ulster had a 10-3 lead at the break.

Centre Luke Marshall bundled over for his side's second six minutes into the second half and they led 17-3 thanks to Cooney's conversion.

The ball spilled out from a ruck on the Quins' 22m line and the scrum-half grubber-kicked and grounded the ball before slotting the extras for a 24-3 scoreline.

That left the Irish province with a quarter of the game to claim an attacking bonus point.

Lock Stephan Lewies closed the deficit to 14 points with 19 minutes to go as Lang converted the lock's touchdown.

Winger Faddes, however, crossed in the corner with four minutes to go to make sure Ulster returned to Belfast with the full tally for their efforts at the Stoop.

Elsewhere, Argentina winger Juan Imhoff scored twice as Racing 92 hammered the Ospreys 40-27 to move half a dozen points clear of Munster at the top of Pool 1.

The Irish province head to title holders Saracens, who have been fined and deducted points in the English Premiership for salary cap irregularities, on Saturday.

There's also an all-French affair as South Africa's World Cup winner Cheslin Kolbe makes his first Toulouse start of the season as they travel to Montpellier.

We live in a world where facts and fiction get blurred
In times of uncertainty you need journalism you can trust. For only R75 per month, you have access to a world of in-depth analyses, investigative journalism, top opinions and a range of features. Journalism strengthens democracy. Invest in the future today.
Subscribe to News24
Related Links
Blitzboks crush Japan in Cape Town Sevens opener
Springbok Women's Sevens side thrashed by NZ in CT opener
Damian's year to dazzle at Newlands?
Next on Sport24
Hundreds gather for 'warrior' Dominici's funeral