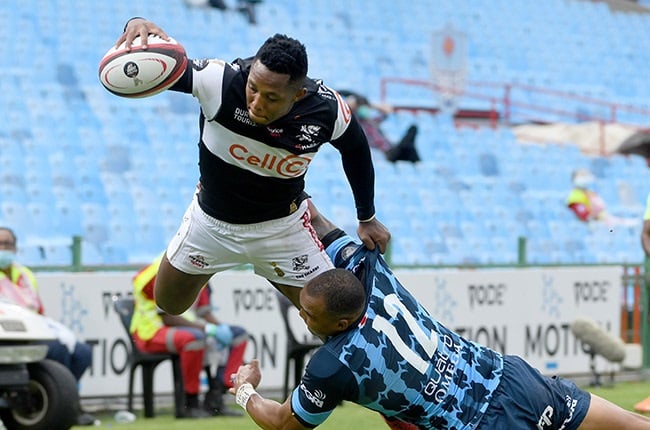 The Bulls ground out a 26-19 come-from-behind win over the Sharks to take the Currie Cup in extra-time at Loftus on Saturday.

The thrilling victory meant they completed a unique Super Rugby Unlocked and Currie Cup double in Jake White’s first season in charge of the Pretoria outfit.

It was a game that lacked only in fans in the stands.

Maybe it was the equaliser – the only way to keep the match as tight as it was.

The blue-blooded Bulls fans would have added an extra shove in the scrum or drive with just their noise.

The visitors again struggled to get their lineout going, a crippling Achilles heel when they lost 41-14 at Loftus during Super Rugby Unlocked, with the long arm of lock Sintu Manjezi a nuisance to hooker Fezokuhle Mbatha’s throw-ins.

Play was suspended immediately after Morne Steyn put the Bulls into the lead with his second penalty of the match, at 6-3, after referee Jaco Peyper got the signal of a lightning storm approaching Loftus.

The suspension lasted about 25 minutes before players came out the tunnel for a 10-minute warm-up and play resumed with the Sharks kicking off to the Bulls.

The clouds cleared from there and the braver team shone through as the Bulls made the most threatening attacking play of the game after 30 minutes but the Sharks defence scrambled enough to avoid conceding a try.

The Bulls had sent a chilling warning, though, even if they made off with only three points.

The Sharks responded with a body blow, however, and succeeded with their first real go on offense when they capitalised on an egregious Steyn error from a 22m restart that went directly into touch and gifted the Sharks a scrum on the tip of their 22m area.

Notshe picked up at the back, fed scrumhalf Jaden Hendrikse, who swung to Aphelele Fassi before S’bu Nkosi finished the first-phase move off with a try in the corner.

As a result, the Sharks took an unlikely 13-9 lead to the break.

The second half was more open, with the sun out and the turf drier. The appetite to run the ball was a lot higher for both teams.

The Bulls were eager to wipe out the deficit early and spurned a number of kickable penalties in the Sharks half.

After Bosch scored his fourth penalty, the hosts finally got their reward for their running endeavour when Arno Botha crashed over from a tap-and-go penalty 5m out after 63 minutes.

The Sharks tried to employ the same courageous approach in the last quarter, after foregoing goal kick attempts, perhaps because of Bosch’s iffy kicking display.

Bosch missed a number of drop goals and four penalty attempts in the game before extra-time, which was uncharacteristically untrustworthy.

Replacement flyhalf Chris Smith kicked an equalising penalty but not before missing an 83rd minute penalty to win it, with the scores locked at 19-all.

Typical of the day, Bosch and Smith both missed penalties in the first half of extra-time.

The Bulls milked another Botha try in the last minute of second half extra-time, with a 19-phase grind that rendered the Sharks defence toothless.

We live in a world where facts and fiction get blurred
In times of uncertainty you need journalism you can trust. For only R75 per month, you have access to a world of in-depth analyses, investigative journalism, top opinions and a range of features. Journalism strengthens democracy. Invest in the future today.
Subscribe to News24
Related Links
Former WP, Lions back on mental toll of injuries: 'My body was broken after 18 operations'
Dylan des Fountain chats to Sport24
FINAL PREVIEW | No such thing as a 'Covid Currie Cup'
Next on Sport24
How Joey Mongalo got a career turbochharge as part of Jake White’s all-conquering Bulls