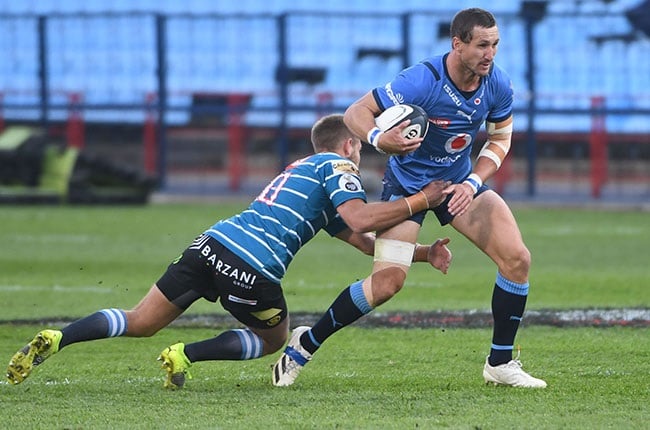 Johan Goosen on the charge against Griquas. (Photo by Lee Warren/Gallo Images)

The Bulls moved to the top of the Currie Cup standings with a convincing 56-33 bonus-point victory over Griquas at Loftus Versfeld in Pretoria on Wednesday.

AS IT HAPPENED | Bulls v Griquas

The home team scored eight tries to three and the five points from the contest moves them above the Sharks to the summit of the log.

The men from Pretoria now boast 34 log points after nine games, while the Sharks are on 30. The Sharks forfeited their game against the Pumas in Nelspruit due to Covid-19 cases in the Durbanites' camp.

Griquas took an early six-point lead courtesy of two penalties from flyhalf George Whitehead, while the Bulls also had prop Mornay Smith sent to the sin-bin for a no-arms tackle.

Pivot Johan Goosen converted a penalty for the home team's first points of the game in the 14th minute and then the Bulls found momentum to score three unanswered tries.

Goosen, hooker Schalk Erasmus and wing Kurt-Lee Arendse went over for five-pointers with Goosen adding one conversion to see his side into a 20-6 lead after the half-hour mark.

Whitehead reduced the deficit with his third penalty and Griquas were right back in the game when scrumhalf Stefan Ungerer went over for a try in the right-hand corner on the stroke of half-time.

Whitehead converted from the touchline and the visitors were only four points behind at the break (20-16).

The Griquas No 10 slotted his fourth penalty of the game to reduce the gap to a single point soon after the restart.

The Bulls extended their lead through a try by lock Walt Steenkamp with Goosen converting, and the Bulls flyhalf added another penalty to take his team into 30-19 lead.

The hosts however were again pegged back as Griquas were awarded a penalty try in the 54th minute for a deliberate knock-down close to the tryline with Arendse also shown a yellow card for the infringement.

The Bulls though made light of being a man down and scored four unanswered tries courtesy of No 8 Elrigh Louw, Erasmus with his second, reserve hooker Jan-Hendrik Wessels and the returning Arendse, who went in for his brace.

Goosen converted two of those tries while replacement Chris Smith also added another two points as the Bulls put the game beyond the visitors from Kimberley and were leading 56-26 with five minutes remaining.

Griquas had the final say on the scoreboard, and brought some respectability to the result, as reserve hooker Janco Uys showed some neat footwork to score a try under the posts.

Griquas, meanwhile, remain third on the log on 26 points.

#BULvGRI FULL-TIME: A tough and thrilling battle comes to an end. Great action from start to finish. It's the Vodacom Bulls who emerge victorious, winning 56-33.#TrueToTheBlue #CarlingCurrieCup pic.twitter.com/fxS3AyjAbB