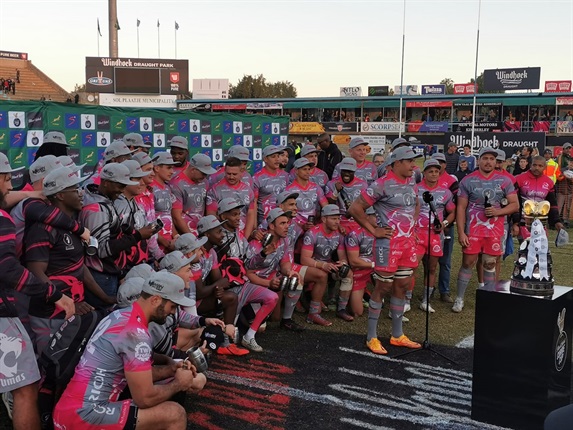 The men who did the business! The Pumas on their way to their winners medals @Sport24news pic.twitter.com/LyoBVWUEe0

Pumas are 2022 CurrieCup champions! ??. Congratulations to the men from Mpumalanga. ???? pic.twitter.com/ldIibFE8Ne

Lloyd Burnard's match report from Griqua Park is in...
READ IT HERE

What it means to the Pumas. How can you not love this game. pic.twitter.com/xB9Omt52dU

Power and precision proved key for the Pumas in this 26-19 victory over Griquas.

They took their chances and defended stoutly against a home side that were their own worst enemies with myriad mistakes.

A fantastic reward for Jimmy Stonehouse, one of SA's greatest servants.

Griquas take 10 phases to get to half-way before their bold attempt to draw the game goes up in flames.

THE PUMAS ARE CURRIE CUP CHAMPIONS FOR THE FIRST TIME IN THEIR HISTORY!

Hanru Sirgel is hit high as carrier and Whitehead has a distinctly more difficult penalty to convert.

They want to go for a score now...

Can you believe it?

Griquas get a penalty and go for posts, allowing them 3 minutes to try and draw the game.

But George Whitehead somehow manages to hit the post.

Just not happening for the hosts.

Whitehead's hold-up is reversed because Franna Kleinhands had his hands in Luther Obi's face.

Griquas go for an attacking line-out, only to have substitute Simon Westraadt throw in skew.

Xamlashe hasn't had the best of games today unfortunately.

It's his backward knock from an attacking move that allows Tapiwa Mafura to hold up George Whitehead.

Pumas defence has been superb.

Just as they think there's a turnaround coming, Griquas have a clearing kick charged down, which is ruled to have been taken into touch by George Whitehead.

The Pumas string together a meaty 15 phases before they're held up over the line.

Eddie Swart turns villain with a shocker of a throw-in, gifting possession to Griquas.

Are the hosts back in this?

Griquas find some impetus on attack after they're awarded a scrum penalty.

But they simply can't find a way to scatter the defence as the Pumas just prove watertight.

Eventually, Eddie Swart gets his hands over the ball, to the relief of the Lowvelders.

Unfortunately discipline costing griquas massively???????they will regret their efforts in this game

The Pumas go a bit static from the penalty before Eddie Fouche to decides to change direction on attack.

Jade Stighling crucially breaks the line as some rapid passing allows skipper Willie Engelbrecht to dot down in the left corner.

What a nice parting gift for the new Stormers flanker.

Nothing going right for Griquas.

Daniel Maartens is pinged for hands-in, gifting the hosts an easy 3 points.

But his No 6 direct opponent Werner Gouws is punished for a hand in the face and the penalty is reversed.

The Pumas have been relentless after an opportunity for Griquas to get out of their half goes sour with a Xamlashe knock-on.

Slick handling puts the home defence under pressure and Sebastian de Klerk's chip over the top doesn't prove a waste as advantage was being played.

Devon Williams looks to have put the Pumas out of sight with a majestic piece of individual brilliance, keeping himself in-field and then chipping forward to round off a brilliant score.

But Sebastian de Klerk's pop-pass to him is ruled forward.

Will Griquas wake up now?

Johan Mulder, a real catalyst for Griquas last weekend against the Bulls, is on for Stefan Ungerer at scrumhalf.

Very good first half by the Pumas, more focussed and used their opportunities better. Griquas need to lift their game, basic errors costing them.

Fouche misses the touchline conversion, but the Pumas take a brilliant 18-9 lead into half-time.

The Pumas are in command!

They've been camping in the Griquas' red zone after the hosts collapse a scrum on half-way.

Eddie Swart wriggles his way through the ensuing maul.

The Pumas are keeping Griquas pinned in their own half.

A sloppy tackle sees Sebastian de Klerk slip through the cracks as the Pumas go on the attack.

Griquas scramble relatively well, but can't stop the momentum and the penalty comes.

Griquas waste a penalty that was in range for Whitehead, but the Pumas' line-speed on defence means the indiscretions will mount.

It proves that way and this time the hosts go for post.

What a response by the Pumas.

Jade Stighling pounces on a switch pass from Chriswill September, who then brilliantly off-loads to Daniel Maartens.

It's then time for him to off-load to the powerful Eduan Swart.

September's service is swift and Tinus de Beer's loopy pass to Devon Williams sees him over in the right corner.

Solid as a rock!

Whitehead nails the penalty and Griquas take the lead!

Pumas waste a good platform with an elaborate line-out tactic that goes wrong through a skew throw-in.

The scrum collapses and Griquas have a relieving kick.

Derik Pretorius does well to secure possession before Eduan Swart makes a good tackle but doesn't roll away.

Both teams trying to establish some territory.

Griquas granted a penalty for obstruction, but hooker Janco Uys shows some nerves with a woeful throw-in.

Pumas try to counter, but are thwarted by some good defence.

A turnover ensues as Griquas try to take advantage, only to cough up possession too.

A kick forward for Tapiwa Mafura goes over the dead-ball line.

Excellent contest on the ground by Griqua lock Derik Pretorius, who immediately forces a penalty after the kick-off.

George Whitehead puts the hosts on the board.

Eddie Fouche makes no mistake in front of the posts.

Veteran Puma prop Corne Fourie, who played in two Super Rugby finals for the Lions, sets a precedent with a massive hit on Griquas No 8 Siba Qoma.

Problem with the PA system apparently, so the fans couldn't hear.

“The butterflies must not turn into ostriches” - Jimmy Stonehouse.

It's also a fantastic achievement for Cwengile Jadezweni to ref in a Currie Cup Final.

But first, the national anthem.

The teams run out and we're ready for kick-off!

Big day for young Griquas skipper Sango Xamlashe, who has to deputise for the injured Niel Otto.

Khanya Dimaza and Luxolo Dimaza are with him all the way: "We're here to support my brother and spoil the party." The teams are out warming up. A very special moment at Griqua Park as some of the championship winning class of 1970 are honoured. That was the last time Griquas won the Currie Cup @Sport24news pic.twitter.com/SMUsdpyVjU

The party is slowly moving into the stadium. Tickets are sold out and they're expecting more than 11 000 at Griqua Park @Sport24news pic.twitter.com/VMaIJvjYBu

A stocky, small(ish) tighthead fronting up against a veteran of two Super Rugby finals and a stint in the English Premiership.

Two immense duels at loose forward and the battle of a rookie skipper against the Currie Cup's most devastating attacker.

Saturday's Currie Cup final between Griquas and the Pumas in Kimberley has no shortage of intriguing duels that will illuminate what is widely considered a Cinderella showpiece.

Phillip Holloway, a life-long Griquas fan, was 9 years old when his side last won the Currie Cup in 1970.

"I was too young, and I don't remember as much as I'd like to about that day. So this means the world to me."