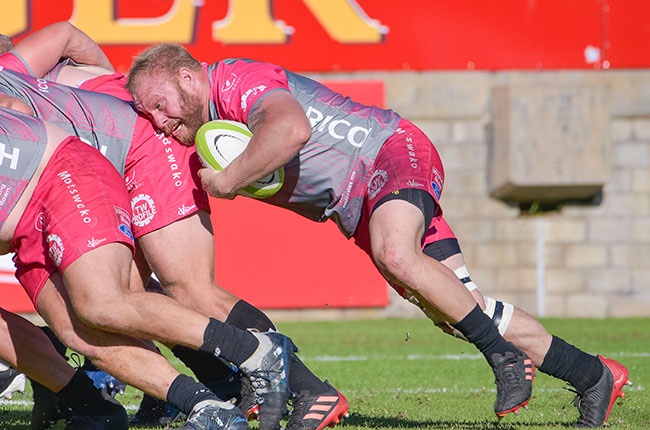 The Pumas kept their Currie Cup semi-final hopes alive with a hard-fought victory over a disappointing Cheetahs outfit at the Mbombela Stadium.

The visitors were often their own worst enemies, with a lack of discipline resulting in two yellow cards and a constant string of penalties in a match that was frequently punctuated by referee Aimee Barrett-Theron's whistle.

The Cheetahs were also disappointing with the ball in hand, as several handling errors and lineout troubles added to their woes.

A couple of early penalties had the Cheetahs on the back foot, setting the tone for what was to follow and allowing the Pumas to kick for the corner and make full use of their powerful rolling maul, which resulted in a well-worked try for hooker Simon Westraadt just five minutes in.

The penalty count continued to increase for the men from Bloemfontein, leading to two easy three-pointers for Eddie Fouche to put the Pumas 11 points up.

When a rare penalty finally went their way, it allowed the Cheetahs to kick for the corner and apply some pressure of their own. Their initial rolling maul was repelled, but the visitors continued to attack the line and a simple pass inside to Victor Sekekete from a ruck saw the big man crash over, with Pienaar adding the extras to bring them back to within four.

Just as the Cheetahs found a way back into the match, however, a high shoulder in the tackle from Aranos Coetzee saw the prop sent to the bin for 10 minutes.

When the Cheetahs' 13th penalty of the match allowed the Pumas to set up an attacking lineout, it was a case of history repeating itself as Westraadt scored from behind another rolling maul to give the Pumas an 18-7 lead heading into half-time.

The Pumas came out with their tails up in the second half and smelling blood and only some desperate goal-line defence from the Cheetahs prevented them from going further behind.

The second half turned into a real arm wrestle, with neither team able to drive home the advantage, a situation that suited the Pumas much better as they were still 11 points clear.

When the home side were given the opportunity to kick for goal shortly after the hour-mark, Fouche gratefully accepted to extend the Pumas' lead.

With a little over 15 minutes to go, the Cheetahs were handed a lifeline when a quick lineout throw to the front caught the Pumas napping, allowing their maul to canter over the line for a try virtually unopposed, with Pienaar nailing a tough kick to bring them back to within seven.

But again, ill discipline let the Cheetahs down, with Duncan Saal sent to the bin shortly after for repeated breakdown infringements.

The Pumas kicked for the corner from the ensuing penalty, and when their rolling maul went down with the line beckoning, the referee awarded a penalty try against the Cheetahs for collapsing.

A late yellow card to Pumas No 8 Willie Engelbrecht handed the Cheetahs another lifeline as the ball was shifted out wide quickly for Clayton Blommetjies to score, but the conversion was missed and the Pumas were still eight points ahead.

The home side nearly put the match to bed as they scored straight from the restart after a fiercely contested up-and-under, but the try was ruled out by the TMO for Pumas centre Erich Cronje interfering with Blommetjies as he jumped for the ball.

However, it didn't matter in the end as the Pumas held on for a well-deserved win that signalled the end of the Cheetahs' Currie Cup aspirations.

We live in a world where facts and fiction get blurred
In times of uncertainty you need journalism you can trust. For only R75 per month, you have access to a world of in-depth analyses, investigative journalism, top opinions and a range of features. Journalism strengthens democracy. Invest in the future today.
Subscribe to News24
Next on Sport24
Georgia to play Currie Cup First Division rugby, South American matches on the cards