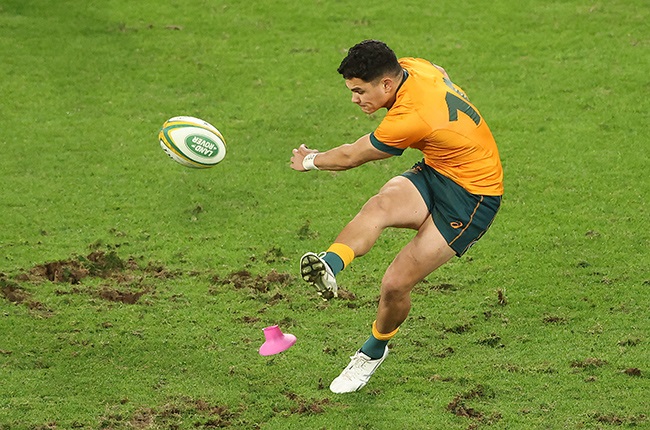 Australian coach Dave Rennie sprang to the defence of young fly-half Noah Lolesio after he had an off-night with the boot in the opening Bledisloe Cup Test won 33-25 by the All Blacks in Auckland on Saturday.

The All Blacks led 33-8 before the Wallabies stormed home to narrow the gap to eight points.

Lolesio, though, left a further 12 points on the field after missing three conversions and two penalties.

The 21-year-old proved to be a match winner in Australia's recent series against France but, in only his sixth Test, his form deserted him when Australia desperately wanted to break 35 years without success at Eden Park.

Lolesio landed only two of seven shots at goal in windy conditions as the All Blacks, who also looked rusty, took a 1-0 lead in the three-match series for the Bledisloe Cup.

Rennie said Lolesio was "disappointed" but he should not be measured by one off-night.

"He was sensational in the French series. You don't go from an ace goal kicker to a novice overnight," the coach said.

"We've got a lot of faith in the kid. He was excellent against France, so he's going to get better and better."

But Rennie, who has the veteran Quade Cooper in his squad as well as Matt To'omua who has also performed well in the 10 jersey, would not be drawn on whether he will be making changes for the second Test next week.

Captain Michael Hooper said the whole team had to shoulder responsibility for the defeat after the Wallabies could claim to have won the opening and closing 15 minutes but were second best in between.

"We've just got to put it together for 80 (minutes). We know the type of rugby we can play and we just want to play it for the duration of the game," he said.

All Blacks coach Ian Foster, while critical of his side for not maintaining pressure for the whole game, believed the Wallabies still would not have won even if Lolesio had his radar working.

"You can't always blame a goal kicker when you win or lose but the scoreline after 65 minutes showed the answer would have been 'no'," Foster said.

"He's a fine young player and played well and things probably didn't go his way. But it happens."

We live in a world where facts and fiction get blurred
In times of uncertainty you need journalism you can trust. For only R75 per month, you have access to a world of in-depth analyses, investigative journalism, top opinions and a range of features. Journalism strengthens democracy. Invest in the future today.
Subscribe to News24
Next on Sport24
France name 9 uncapped players for November Tests