'I was an immature boy,' says Pumas skipper Matera in racist tweet row 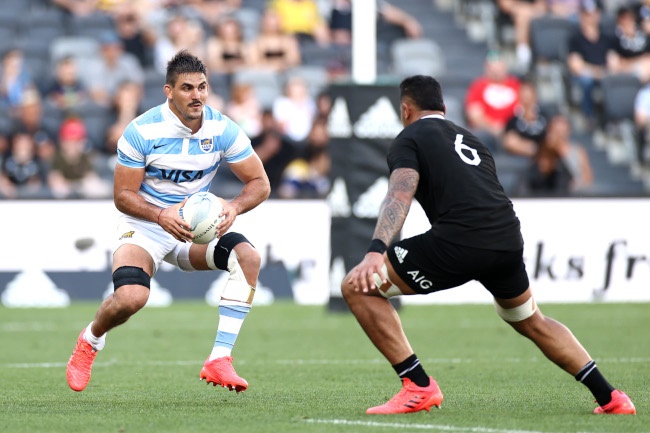 Argentina rugby captain Pablo Matera said he was just "an immature boy" when he posted tweets deemed to be racist and which saw him briefly suspended from the Pumas team earlier this month.

"I imagine there are a lot of people who have felt offended, hurt and I would like to ask their forgiveness," said Matera.

"It was a really bad use of social media with my friends from high school. I just want to let people know that I don't believe any of these words, that they do not represent my values in any way."

The flanker was a key player for the Pumas team which shocked the All Blacks during the recent Tri Nations in Australia where the furore erupted.

Matera, who plays in France with Stade Francais, Jaguares hooker Santiago Socino and Bordeaux lock Guido Petti, were all briefly suspended for what were described as "discriminatory" and "xenophobic" posts.

However, just two days after Argentine rugby officials said the tweets were "unacceptable" the three were reinstated when it was reported other players would strike in support of their team-mates.

"At the time of these tweets, I was an immature boy, quite a rebellious boy," added Matera.

"I was not an easy child to raise for my mother. A lot of time has passed, and when I look back I see how much I have grown as a person."

Matera said his family had received a stream of "malicious messages" as a consequence of the row.

"This is what made me suffer the most, to have involuntarily involved them in this horrible situation," he added.

"The most important thing for me today is to know that I made a mistake. Today, I just ask for forgiveness and move on."

We live in a world where facts and fiction get blurred
In times of uncertainty you need journalism you can trust. For only R75 per month, you have access to a world of in-depth analyses, investigative journalism, top opinions and a range of features. Journalism strengthens democracy. Invest in the future today.
Subscribe to News24
Related Links
Another Cheetahs stalwart off to the UK
Bok coach has no regrets over pulling out of Rugby Championship
Easy on the pudding! Currie Cup scheduling makes for unique WP Christmas
Next on Sport24
Jake White opts for continuity by naming unchanged Bulls starting XV to face Pumas