London - Rugby chiefs have the chance to create history by awarding the 2023 World Cup to Ireland, Prime Minister Leo Varadkar said on Monday.

Varadkar, who fronted the bid's final presentation in London to the World Rugby Council, highlighted the all-island nature of the bid, which also involves matches over the border in Northern Ireland.

The Irish have never hosted the tournament - though they have hosted matches in previous editions - and are up against South Africa, who staged the four-yearly event in 1995, and the 2007 hosts France.

Varadkar, who has cross-party support for underwriting the £120 million fee for hosting the tournament, also has his British counterpart Theresa May on board after she wrote a letter of support to governing body World Rugby.

"This is an enormous opportunity for us to showcase our great country to the world," said Varadkar prior to going on to a meeting with May.

"It is an all-island bid which is is very positive and it gives rugby a chance to make history and let something very special happen in that it will demonstrate how sport brings people together.

"It also allows us to use the Irish diaspora from around the world to showcase the sport."

Northern Ireland experienced decades of violence during the so-called "Troubles" between Catholics and Protestants as the IRA (Irish Republican Army) strove for the North to break away from British rule and become part of Ireland. The landmark 1998 Good Friday peace agreement ended most violence.

Varadkar, who admitted he had never been that good as a player, despite playing for the parliamentary team, said that whatever was agreed following the Brexit negotiations would not affect the hosting of the event.

"There is uncertainty in trade arrangements but where there is no uncertainty is with regards to common travel," he said.

"People can travel without a passport across the north-south border so whatever happens with trade it won't affect people attending matches."

Varadkar, who was sports minister when the idea was first broached of bidding for the 2023 tournament, said that the Irish people were firmly behind the bid.

"I have been talking to lots of people and in those conversations they are very much behind the bid," said the 38-year-old.

"Plus, a small nation hosting a major tournament, not just in Dublin but all round the island (including matches in Northern Ireland) certainly finds favour with the people.

"The French have said it won't cost their taxpayer but we are saying ours will benefit them from the investment in the economy and improved infrastructure."

Varadkar said despite being the only head of government present - France sent sports minister Laura Flessel and South Africa sent vice-president Cyril Ramaphosa to London - he was too experienced in the political game to be counting on certain victory.

"Yes, I am confident but like everything it comes down to votes," he said.

"I wouldn't have missed this for the world. Lets hope we get good news on November 15."

Rugby chiefs will make a final decision on who will host the 2023 event in London on November 15 after a technical report is released with a recommendation on October 31.

We live in a world where facts and fiction get blurred
In times of uncertainty you need journalism you can trust. For only R75 per month, you have access to a world of in-depth analyses, investigative journalism, top opinions and a range of features. Journalism strengthens democracy. Invest in the future today.
Subscribe to News24
Related Links
Lions cut fixtures for 2021 SA tour - report
SA unveils the triple-win bid to host RWC 2023
Heartbreak for Morne Steyn's Stade Francais
Next on Sport24
How coronavirus turned Rugby Championship into Tri Nations 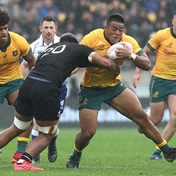