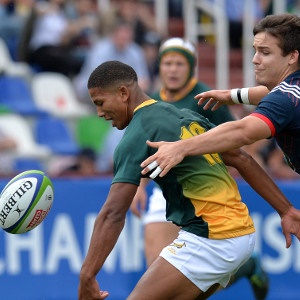 Cape Town - Junior Springbok coach Chean Roux praised his team's fighting spirit as they outplayed France 37-15 to win the bronze medal at the World Rugby U20 Championship at the Mikheil Meskhi Stadium in Tbilisi on Sunday.

The Junior Boks overcame a tight first half in which they trailed 8-7, to deliver a strong second-half showing in which they crossed the tryline four times, with hooker Johan Grobbelaar touching down twice, to outplay their opponents.

They backed this up with a solid defensive effort in which they limited France to a consolation try in the dying minutes from a quick tap to take their try tally to two for the match, and to secure the convincing victory.

"The players showed great character to come out in the second half the way they did in what marked their fifth match in the tournament," said Roux.

"We didn't play perfect rugby, but we stuck to our structures and one or two things we worked on before this match gave us momentum.

"All the credit must go to the players, they played very well. This is a special group of players."

With the team having putting in the hard yards to prepare for the tournament since March, Roux said the victory was well deserved.

"It is going to sad to get on the plane and say our goodbyes when we return home," said Roux. "But the players really deserve this win for all the hard work they put in over the last few months."

France came out firing and applied pressure on the Junior Boks from the outset as they retained possession and put together phases, while they gained yards on attack with their smart off-loads.

But the SA U20's absorbed the pressure well and managed to shut them out on defence.

The Junior Boks struck first with lock Ruben van Heerden scoring a try against the posts in the 15th minute from a pick-and-go, which Manie Libbok converted to hand Roux’s team a 7-0 lead.

France hit back with a try by hooker Peato Mauvaka from a rolling maul, and flyhalf Baptiste Couilloud slotted over a penalty goal six minutes before halftime to force their way into an 8-7 lead, which they held onto going into the break.

The Junior Boks reclaimed the lead shortly after the break as hooker Johan Grobbelaar received the ball in space and dashed to the tryline, with Libbok’s conversion and a subsequent penalty goal pushing them 17-8 ahead.

They built on this with a stunning intercept try by replacement centre David Brits, which was followed by tries by Grobbelaar and No 8 Juarno Augustus, while another penalty goal by Libbok in between inflated their lead to 37-8.

France forced their way over the tryline with three minutes left compliments of Couilloud, but this was too little too late and they had to settle for the 37-15 defeat.

We live in a world where facts and fiction get blurred
In times of uncertainty you need journalism you can trust. For only R75 per month, you have access to a world of in-depth analyses, investigative journalism, top opinions and a range of features. Journalism strengthens democracy. Invest in the future today.
Subscribe to News24
Related Links
Jones hails England veterans and rookies
Gatland says Hansen is 'worried' as Lions loom
Boks ready to be a force again - Coetzee
Next on Sport24
Elton Jantjies back to skipper Lions against Griquas, Gianni Lombard at fullback 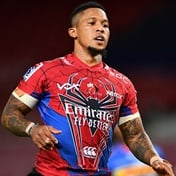