Ludik wary of returning to SA due to crime rate 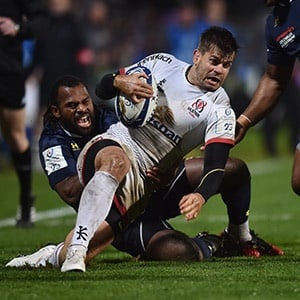 South African-born utility back Louis Ludik says he wants to stay in Ireland once his professional rugby career ends.

The 33-year-old, who can play wing and fullback, has played for Irish club Ulster since 2014 and told the Irish Mirror that fears of returning home will keep him in Belfast.

In November last year, Chamé shared a video online of a 56-year-old South African woman who was stopped at a crossroads and shot dead in her car.

"It's no shock, really, no," Ludik told the Irish publication. "That happens, probably every day. Somewhere. There's so many murders, and things like that happening. It's scary... it's shocking to watch but it's a reality.

"The scary thing is that's the norm in South Africa. Because violence is everywhere, you get used to it. So when you step out of that environment, you realise how unnatural it actually is."

Ludik added that his wife and sister had been involved in smash-and-grad incidents in South Africa, while his wife's father had also been hijacked.

We live in a world where facts and fiction get blurred
In times of uncertainty you need journalism you can trust. For only R75 per month, you have access to a world of in-depth analyses, investigative journalism, top opinions and a range of features. Journalism strengthens democracy. Invest in the future today.
Subscribe to News24
Related Links
Coronavirus | Our Bok 2019 heroes must make a noise
Ex-rugby star 'floored' by coronavirus
Coronavirus | Bulls, Lions all test negative
Next on Sport24
Happy Birthday! SA sporting community sends Springbok captain Siya Kolisi love on his 30th