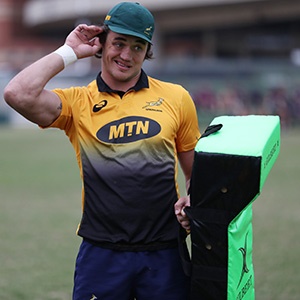 Cape Town - Springbok lock Franco Mostert is still waiting for clearance from World Rugby before he can start his stint with Gloucester.

The 28-year-old has been the subject of an ongoing contractual dispute since his decision to leave the Lions to join former coach Johan Ackermann in England.

The Lions have said that there were irregularities in the negotiations between Mostert and Gloucester, and the matter has since been elevated to the top with World Rugby set to make a ruling.

While Mostert has met up with his new team-mates, he cannot play for them until he gets the green light from the game's governing body.

"We’re excited to have him here. He’s been through a long Super Rugby and a long Test series back home with the Rugby Championship and also now in Europe.

"He’s played a lot of 80-minute games, so we’ll obviously have to manage him and see but we’re confident that he’s got a legal contract with us, and World Rugby will hopefully soon give us our clearance that we can register him and get him back on the field.

"We don’t want to keep a player without work, and also we’re keen to get him involved here so hopefully this week or somewhere in the near future it will be resolved because it’s an ongoing thing."

Gloucester are next in action on Saturday when they host the Worcester Warriors in the Aviva Premiership.

We live in a world where facts and fiction get blurred
In times of uncertainty you need journalism you can trust. For only R75 per month, you have access to a world of in-depth analyses, investigative journalism, top opinions and a range of features. Journalism strengthens democracy. Invest in the future today.
Subscribe to News24
Related Links
Australia hang up on Jake after Wallabies coach bid
WIN! Cape Town Sevens tickets!
The 5 rugby laws I hate most
Next on Sport24
Decision to boot Cheetahs from PRO14 is fuelling their Super Rugby Unlocked charge