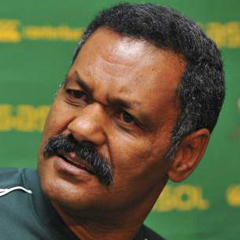 De Villiers, who described the appointment as the "greatest day of my life", will be assisted by Brendon Dawson.

De Villiers was previously involved with the country’s Under-20 team, has signed a two-year contract.

De Villiers' immediate task will be to attempt to help Zimbabwe to qualify for next year’s Rugby World Cup in Japan, which, if successful, would be the country's first World Cup appearance since the 1991 tournament in England where they lost all three group matches to Scotland, Ireland and Japan.

Zimbabwe are likely to face stiff competition from Namibia in their hopes of qualifying. Should they do so however, they face a daunting prospect at the tournament itself, with the 'Africa 1' team - whoever it may be - drawn in the same pool as defending champions, the All Blacks, the Springboks and Italy.

De Villiers coached the Springboks between 2008 and 2011 and was the director of rugby at the University of the Western Cape between 2012 and 2015.

During his tenure as Springbok coach, De Villiers won five out of 11 Tests against the All Blacks - a better record than most Bok coaches in recent times.

Other notable achievements for De Villiers as Bok coach was a Tri-Nations win in 2009, as well as a series win over the British and Irish Lions that same year.

"This is the greatest day of my life..." says Peter de Villiers after being announced as the new @zimbabwerugby head coach pic.twitter.com/tMlRrxxSWv

Peter de Villiers has been names as the ne @zimbabwerugby head coach and will be assisted by Brandon Dawson pic.twitter.com/HC7vS0U2mA

We live in a world where facts and fiction get blurred
In times of uncertainty you need journalism you can trust. For only R75 per month, you have access to a world of in-depth analyses, investigative journalism, top opinions and a range of features. Journalism strengthens democracy. Invest in the future today.
Subscribe to News24
Related Links
No rugby on SABC radio in 2018?
WP official to hear fate after racial incident
Italy extends contract of SA coach
Next on Sport24
SA Rugby investigating tragic death of Border club player during unsanctioned tournament