Currie Cup to be used as qualification for expanded PRO16? 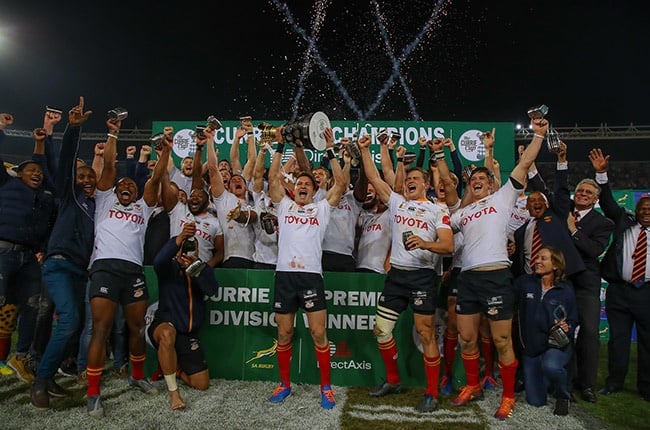 The Cheetahs won the 2019 Currie Cup (Photo: Gordon Arons/Gallo Images)
Gordon Arons
This year's Currie Cup could be used as a qualifying event to determine South Africa's four teams in an expanded PRO16 event in Europe.

SA Rugby on Friday held its general council meeting, and according to Rapport, the idea was mooted by Cheetahs managing director Harold Verster.

The meeting was held virtually via Zoom, with the Afrikaans publication stating various members who sat in on the meeting said that SA Rugby's director of rugby Rassie Erasmus found the idea reasonable, provided teams are able to call on their Springboks.

However, if the revised Rugby Championship (scheduled to start on 7 November) goes ahead, then the Springboks could only feature in the first part of the Currie Cup.

It's now a done deal that South Africa will no longer form part of Super Rugby, and while the four teams to enter the PRO16 are yet to be determined, it looks likely to be the Bulls, Lions, Sharks and Stormers, with the Cheetahs and Kings out in the cold.

There are also plans to reduce the number of franchises playing in events from six to four, but the Cheetahs have indicated that they would be willing to go to court to protect their franchise status.

"As far as the Cheetahs are concerned, we have a binding contract which cannot be breached for whatever reason without legal consequences," the source said.

Adding to the complication is that broadcaster SuperSport, an important partner of SA Rugby, is reportedly in favour of the idea of having the four Super Rugby franchises take part in the PRO16.

SA Rugby's general council will vote on the matter next month.

We live in a world where facts and fiction get blurred
In times of uncertainty you need journalism you can trust. For only R75 per month, you have access to a world of in-depth analyses, investigative journalism, top opinions and a range of features. Journalism strengthens democracy. Invest in the future today.
Subscribe to News24
Related Links
Could the Springboks replace Japan at 'Eight Nations' tournament?
Springboks can return to contact training, playing future remains uncertain
The divide between school soccer and school rugby, cricket in SA
Next on Sport24
SA teams to contest United Rugby Championship, prospects of Champions Cup participation

Choose your newsletters
Voting Booth
Having lost the first Test against the British & Irish Lions, can the Springboks recover to win the series?
Please select an option Oops! Something went wrong, please try again later.
Yes, they will win the series 2-1. Go Bokke!
54% - 3420 votes
The Boks will win a Test, but will lose the series 2-1.
28% - 1782 votes
It's not looking good. A 3-0 whitewash is on the cards.
18% - 1153 votes
Previous Results
Tokyo Olympics
SA Olympics medal prospects in Tokyo - Ruswahl Samaai