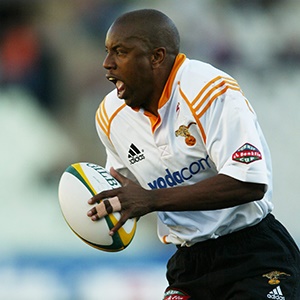 Cape Town - Former Cheetahs flyhalf Kennedy Tsimba is not happy to see his former team participate in the PRO14.

In an exclusive interview with Sport24, Tsimba said the PRO14 cannot be held in the same regard as Super Rugby.

The Cheetahs and Southern Kings joined the European competition in 2017 when they lost their Super Rugby status.

“I haven’t really bought into the idea of the Cheetahs moving to that competition. I think the PRO14 is a B-rate competition because you don’t see the top players from the likes of Munster and Leinster released to play in that league. Only when they play in the European Cup, do you see all their top players. It makes a statement in terms of how they see the PRO14,” Tsimba said.

The 44-year-old Tsimba, who played for the Cheetahs between 2000 and 2005, also has his reservations on whether the PRO14 benefits South African rugby.

“Whether it’s bringing financial benefit, the Cheetahs will know in the long run, but the crowd attendances haven’t been impressive. Is the PRO14 benefiting South African rugby or is it costing us more money? And how many players are we developing?

“The Cheetahs always used to develop players some of whom went on to star for the Springboks. However, if I look at the current team it looks like they are trying to get numbers to survive in a competition that doesn’t really enhance South African rugby from my point of view."

Tsimba, who is currently the coach and director of rugby at St Alban’s College in Pretoria, added: “For me, the PRO14 is a competition that is neither here nor there. Super Rugby far exceeds the standard of the PRO14. You have got stars that European clubs are offering big contracts to, which is an indication that Super Rugby possesses the world’s best players.”

We live in a world where facts and fiction get blurred
In times of uncertainty you need journalism you can trust. For only R75 per month, you have access to a world of in-depth analyses, investigative journalism, top opinions and a range of features. Journalism strengthens democracy. Invest in the future today.
Subscribe to News24
Related Links
Jaguares name side for Sharks clash
Gelant rejoins wide-open Bok No 15 race
Venter: SA Rugby contracting model 'an unbelievable mistake'
Next on Sport24
SA teams to contest United Rugby Championship, prospects of Champions Cup participation

Choose your newsletters
Voting Booth
Should Proteas star Quinton de Kock continue playing at the T20 World Cup even if he doesn't take the knee in support of the fight against racism?
Please select an option Oops! Something went wrong, please try again later.
Yes! He should be allowed to show his support any way he chooses
39% - 2464 votes
No! If De Kock refuses to unite with his teammates, then he should be on the next plane home
12% - 738 votes
The only ones at fault here are Cricket SA, who have sabotaged another Proteas World Cup
50% - 3179 votes
Previous Results
Showmax
The story of a legend: Sir Alex Ferguson