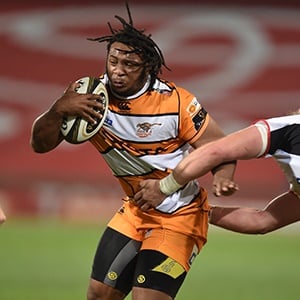 It's clear that hooker Joseph Dweba speaks the same way he plays: direct and to the point.

In an interview with Rugby Pass, where the former Cheetahs No 2 went a little too gung-ho for some, Dweba pointed out his unhappiness with a previous contract he was offered in Bloemfontein.

The exact words he was reported to have said were: "It was a sh*tty contract."

Reacting to those comments, Cheetahs CEO Harold Verster told Sport24's Lloyd Burnard that: "I think it was a terrible thing to do and I think he burnt bridges, not just with us."

Dweba's comments were inarticulate and could have been put differently but a lot of what he expressed was valid. It was a "burst pipe" comment, coming after years of frustration that he as well as many other black players that have represented the union have felt.

Verster's reaction suggested that Dweba, who accepted a contract to play in Bordeaux, France, whenever rugby resumes, would someday rue uttering those words. But that should not be the case. Dweba should not be vilified for expressing what he felt at a particular point in time.

Instead, the Cheetahs should relook their sometimes unfeeling contracting towards players of Dweba's background - seek to understand them and not exploit them.

The back story to those comments is that Dweba was desperate; as desperate as any young rugby player thrust into a brutal sport, hundreds of kilometres away from home and with his first child on the way.

Rugby, he said, was his only way out or else he would be a miner, just like his father.

He made a sympathetic plea to an unnamed defence coach that he needed more game time, to properly show his wares and thereby validate signing an improved deal. He was told to be patient, despite doing all he could in training.

After taking his time to accept the meagre new deal, when it was eventually offered, the Cheetahs withdrew it - a classic case of putting one in one's place.

Without game time to drive some sort of bargaining power for his signature, Dweba was not in a position to look that particular gift horse in the mouth. And so he went to Verster's office, pleading his case, hoping the fact that he had a baby on the way might tug at his heart-strings and pierce past the cut-throat mind of a businessman.

It didn't work. Verster, according to Dweba, offered him the same pitiful deal. He took it but, he thought to himself, "Damn this is a sh*tty contract but I'll show them my worth on the field." (My words, not his).

Dweba, unfortunately, is not unique in the situation he had found himself in. Lest we forget, it's only a decade ago that the Cheetahs went to court to force then Junior Springbok prodigy Lionel Mapoe to honour a R200 000 annual salary - one that was so below market value that Mapoe left Bloemfontein to train with the Sharks in Durban in protest.

A Free State court eventually ruled that Mapoe had to honour his contract or whoever coveted his services had to compensate the province. Verster was president of the union at the time.

The protracted legal saga cost Mapoe valuable time on the field. Although I'm not privy to the details of the contract, it's possible that Dweba, a Junior Springbok and SA Schools product himself, was grossly under-valued.

Some untold stories from six years before the Mapoe incident include that of a winger (who shall remain nameless) that was paid R300 every fourth month to play for the Free State Under-20s. He happened to be black and came from a poor farm-workers background.

That player quickly turned himself into an SA Under-21 international before going to the Bulls and then becoming an SA Sevens international.

The flip side, of course, is that the Cheetahs offer an invaluable opportunity for some talented black players that have found no homes in other big unions to get a chance to make a name for themselves.

Eastern Cape talent has benefitted from turning out for the Cheetahs - and by proxy, Griquas - which has led to some getting massive contracts elsewhere, such as Dweba has done.

But you have to worry about the trend that's developed. As we speak, promising lock forward Sintu Manjezi could be in a legal battle, according to a City Press report, that could turn ugly. You have to wonder, if it was Adriaan Strauss, would they go to extreme lengths to prevent him from pursuing his dream of playing for the Bulls?

We live in a world where facts and fiction get blurred
In times of uncertainty you need journalism you can trust. For only R75 per month, you have access to a world of in-depth analyses, investigative journalism, top opinions and a range of features. Journalism strengthens democracy. Invest in the future today.
Subscribe to News24
Related Links
SA Rugby boss open to Rugby Championship in Australia
All Blacks, Wallabies stars want SA out of Super Rugby - report
Gelant's Stormers arrival softens blow of losing 'hard to replace' Leyds
Next on Sport24
SA teams to contest United Rugby Championship, prospects of Champions Cup participation