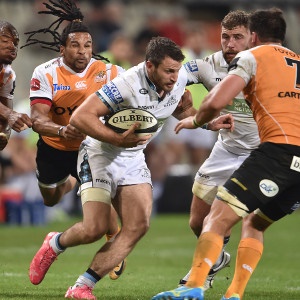 Cape Town - There was a lot of talk about the altitude perhaps catching up with them, but instead it was the Glasgow Warriors who finished the stronger as they maintained their momentum with an exciting 29-26 win over the Cheetahs in the PRO14 in Bloemfontein on Friday.

The Warriors are coached by former Chiefs mentor Dave Rennie, and you can already see the impact that he is having on the Scottish franchise. With the Cheetahs murdering them in the scrums and dominant in the lineouts, the visitors had to rely on tempo and keeping the ball in play to get their win, and they did that to great effect.

The Cheetahs should not feel too disconsolate for losing as they played their part in a high quality game and it was the visitors who packed the most internationals, and by some distance. They had several star players, including former Hurricanes openside flank Callum Gibbins, who scored two tries, but they probably wouldn’t have won were it not for the deft touches of their flyhalf Finn Russell.

The Scotland international inspired the two late tries that allowed the Warriors to come back from a six point deficit to win the game as the lead changed hands a couple of times in the last 10 minutes. It was Russell’s chip and gather in the 70th minute that started the interplay that led to a try for replacement Henry Pyrgos.

That try put the Warriors into a narrow lead (24-23) but the Cheetahs, who knew they could control the game if they could just set up set-piece opportunities - they were awarded penalties at almost every scrum in the last part of the game - fought back to reclaim the lead with an Ernst Stapelberg penalty with just four minutes remaining.

That was the cue for the Warriors to put in one last big effort. The Cheetahs defence was outstanding for most of the game but it started to wilt in those final minutes and after the Warriors had probed their way through a defensive hole it was Russell who had the quick thinking to kick the ball into the left hand corner. There were no Cheetahs defenders back as the ball bounced in the in-goal area and Rob Hartley dotted down for what was to prove the winning score.

Earlier the Cheetahs looked like they might be about to close the game out and in retrospect they might rue their decision to kick for posts when they forced a penalty on the Warriors line in the 66th minute. Stapelberg did kick the goal but the Cheetahs scrum was so dominant that from that position it would have been hard for the Warriors to keep them from scoring a try that would have put them more than a score ahead with less than a quarter of an hour remaining.

Make no mistake too, the Cheetahs were also unlucky. They resisted a long, sustained period of pressure from the Warriors in the first 10 minutes after half-time and had started to click on attack and force the Warriors back into their own half. The Cheetahs were deep on attack and looked to be building for a try as they spun the ball left only for the ball to be intercepted by Scottish test wing Tommy Seymour.

Seymour wasn’t able to run the length of the field himself as he was caught by the pacey Makazole Mapimpi but he was able to get the ball to Gibbins, who went over for his second try. It was effectively a 14 point swing against the Cheetahs, who were leading 17-10 at the time and who would have gone 14 points clear had they scored there. Instead they found themselves level at 17-all.

The Cheetahs were forced to make many more tackles than the busy Warriors and in that sense it might make sense that ultimately it was they who looked like they were gasping for air at the end and the visitors who were getting stronger. But for much of the first half it looked like it would be the Cheetahs’ night as they led for most of the way.

Their first try was scored by Sergeal Petersen, with the fullback popping up outside a good surge down the right flank from Mapimpi. That cancelled out an early Russell penalty and with Stapelberg kicking a three pointer of his own, the Cheetahs led 10-3 until the 34th minute, which was when Gibbins took advantage of an aggressive clean-out that cleared a path for him under the Cheetahs’ posts to level the scores at 10-all.

It was then the Cheetahs’ turn to force a swing, with a turn-over during a good Warriors attack resulting in a field kick from a Cheetahs forward that fell perfectly for the hyper-active and omnipresent Rosco Spekman, who ran in the try on the stroke of half-time to give the hosts their halfway point lead.

The defeat ended a good sequence of home wins from the Cheetahs, who have made a great fist of their promise to turn their home stadium into a fortress after a poor start to the competition during their first overseas tour. They will now be under pressure to make up for this loss by winning as they hit the road again. The Warriors though will be particularly pleased with the way they dug in to win at a difficult away venue and retain their impressive unbeaten record.

This loss sees the Cheetahs slip to third on the Conference A standings with 16 points in their six games, while Warriors remain on the top of the standings with 28 points.

We live in a world where facts and fiction get blurred
In times of uncertainty you need journalism you can trust. For only R75 per month, you have access to a world of in-depth analyses, investigative journalism, top opinions and a range of features. Journalism strengthens democracy. Invest in the future today.
Subscribe to News24
Related Links
Protecting the ball key for Springboks
Blue Bulls trounce Free State in try-fest
It's OFF! Cosatu suspends Bok v All Blacks protest
Next on Sport24
Irish all for South African powerhouses joining PRO Rugby