Bulls flyer has nothing to prove against old team: 'This isn't Madosh versus the Sharks' 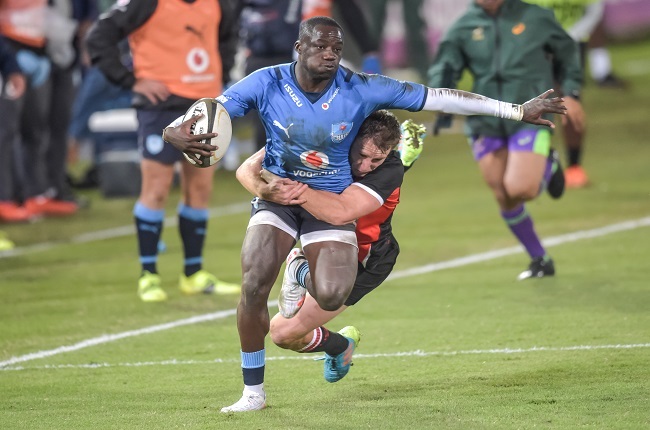 Madosh Tambwe insists there's no reason for him to summon extra motivation for Saturday's top-of-the table clash of the Rainbow Cup SA against the Sharks.

The 23-year-old winger, who's rapidly become an important figure in Jake White's backline since moving to Loftus in February, was still contracted to the Durbanites at the end of last season.

He did well at Kings Park, handling his role as a squad player with aplomb and putting useful pressure on his then Springbok team-mates Sbu Nkosi and Makazole Mapimpi.

But Tambwe admitted earlier this year that personal issues saw him to return to Johannesburg, prompting White to put out some feelers.

"To be honest - and I really don't want to sound arrogant - I've got nothing to prove to anyone," he said on Tuesday.

There were murmurings that the arrival of Yaw Penxe, one of the Southern Kings stars left in the lurch after the franchise's liquidation last year, on loan and then full-time basis played a role, but Tambwe is once again emphatic.

"Again, it's not Madosh-versus-Yaw," he said.

"I don't know who's going to be selected [to be my direct opponent] and, to be honest, I really don't care. I just have to do my part in executing our plan and serve my team. Me leaving the Sharks has got nothing to do with any individual."

Instead, Tambwe takes confidence from finally breaking his try-scoring drought for his new franchise, a brace that went a long way towards securing the Bulls a hard-fought away win over the Stormers last weekend.

Not through lack of effort though.

He actually crossed the whitewash three times previously, only to have had them chalked off due to the intervention of the TMO.

"It's good to get them behind my name," said Tambwe.

"I had a couple disallowed in the preparation series and then there was also the score against the Lions. Nonetheless, as a winger, you're bound to score, you want to score. It's one of the responsibilities of a winger."

His rotten previous luck on that front is, rather interestingly, part of the broader debate over rugby's increased drive towards accurate on-field decisions being made - foul play, scoring opportunities etc. - through the use of the TMO, particularly the newly introduced captain's call.

But Tambwe is philosophical about the issue, noting that it will probably always remain a divisive one.

"It's always going to be an issue of which side of the coin you land. If you're the team who had the try disallowed, it's going to be frustrating. You want to put the points on the board," he said.

"At the other end, you're the team who's been granted a reprieve. Suddenly, you have the opportunity to put pressure on your opponents again because you have your tail up. It's sometimes the difference between winning and losing and something you just have to deal with."