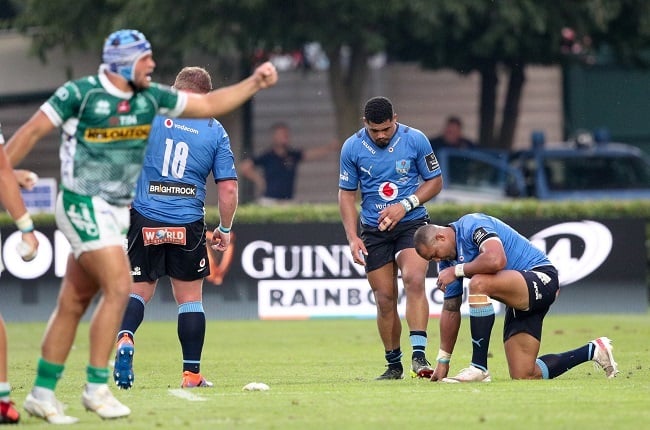 The Bulls were outplayed. (Photo by Roberto Bregani/Gallo Images)

But the wily former Springbok coach admitted that Saturday's disappointing 35-8 loss to Benetton in the Rainbow Cup final is a timely reminder to franchises that September's entry into the United Rugby Championship is going to be tougher than some people might be willing to concede.

If anything, the result emphasised that South African rugby - forced into "isolation" due to Covid-19 - isn't strong enough to solely rely on domestic competitions to stay competitive.

"It was a bit arrogant from South Africans to just assume you arrive in Italy, you beat this club side and come back home," said White.

"This is a different proposition altogether. We've been playing against each other for the past months, we know each other backwards and every coaching staff.

"To be honest, we know every tactic because it's all we've seen for about a year. To come here into the unknown makes you so much better. I'm glad we had the opportunity. I'm disappointed we didn't get over the line, but we've grown."

It was indeed the finer, more nuanced details that this burgeoning Bulls team will now realise are crucial at this level.

The margin for error is markedly smaller, opposition more willingly take a chance on varying their game like Benetton did in not starting the game more conservatively and defensive play needs to be tweaked.

"We can't come here assuming everything will be the same. We looked like an inexperienced team today. There wasn't one aspect of the game where we looked as if we were on top of it. That's not how we've been over the past period," said White.

"We've scrummed well, defended well and attacked well in previous games. Not one of those areas were in place today. It's a different defensive system, a different forward pack you're playing against. It's little things like that that matter.

"It's easier to do analysis on domestic rugby. It's far tougher on teams and players you don't know. That's the uniqueness of playing here."

While not suggesting that he and his coaching lieutenants were caught out, the Bulls' director of rugby also noted that the wiles of Benetton's experienced Kiwi coach, Kieran Crowley, kept them on their toes.

"They definitely had a few tricks up the sleeve. They played tactically really smart. We barely touched the ball in the first 21 minutes. Credit to Benetton, they deserved this win," said White.

"A lot of Benetton's players have played for Italy over the past months. It's a completely different ball-game here, teams here are well-coached."

We live in a world where facts and fiction get blurred
In times of uncertainty you need journalism you can trust. For 14 free days, you can have access to a world of in-depth analyses, investigative journalism, top opinions and a range of features. Journalism strengthens democracy. Invest in the future today. Thereafter you will be billed R75 per month. You can cancel anytime and if you cancel within 14 days you won't be billed.
Subscribe to News24
Next on Sport
Bulls produce a shocker as brilliant Benetton gallop to Rainbow Cup title