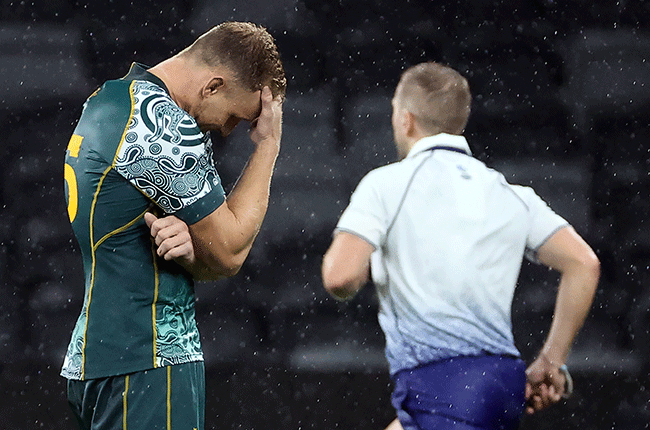 Reece Hodge missed a last-gasp penalty as 14-man Australia drew with Argentina for the second straight game to confirm New Zealand as Tri-Nations champions on Saturday.

As it happened | Australia v Argentina

The Wallabies needed a crushing 101-point win over the Pumas, who were missing captain Pablo Matera after a racist tweet scandal, to overhaul the All Blacks in the tournament's final game.

Argentina needed to win by 93 points to lift the trophy, but a high-scoring match was never in prospect on a muggy night of steady rain in Sydney.

Instead, they remarkably finished at 16-16, a fortnight after they couldn't be separated in a 15-all clash.

Hodge could have won the game but sent his 45-metre kick wide with a minute remaining, just as he did in the dying seconds of their drawn match two weeks ago.

"We're not happy with the performance, we're disappointed we can't get a win in our last game," said Australia captain Michael Hooper.

"It was hard conditions tonight. I think we were smart with our kicks there, we won the territory battle but we just couldn't convert."

Australia's discipline again let them down in the first half with Argentina going to the break 13-6 in front, scoring 10 points when Wallabies skipper Michael Hooper was in the sin-bin for a high tackle.

Lukhan Salakaia-Loto was then sent off with 20 minutes left but the Wallabies dug deep to save face.

"We showed a lot of character tonight, seven points down and reduced to 14 men. We controlled it pretty well and played in the right areas of the part and got rewarded," said Wallabies coach Dave Rennie.

The draw ensured Argentina finished the tournament second, capping a momentous tour by Mario Ledesma's men who endured lockdowns and a slew of Covid-19 cases before upsetting New Zealand then drawing with Australia a fortnight ago.

The Wallabies took the wooden spoon in a poor end to Rennie's first year in charge, which has seen them win just once.

It was battling effort by the Pumas, whose build-up was disrupted by the tweet scandal.

Matera, second row Guido Petti and replacement hooker Santiago Socino were all suspended after years-old "discriminatory and xenophobic" comments surfaced, before a shock U-turn saw them reinstated on Friday.

The posts emerged after criticism that the Pumas did not adequately pay tribute to Argentina football icon Diego Maradona, who died last month, before last weekend's defeat by the All Blacks.

They all wore a No.10 on the sleeve of their jerseys on Saturday, in honour of Maradona, and were clearly fired-up.

With playmaker James O'Connor back to direct the attack, the Wallabies enjoyed plenty of early possession and their pressure paid off when Pumas lock Marcos Kremer was yellow-carded on 15 minutes for a dangerous clean-out.

It proved costly, with Hodge converting the resulting penalty.

But the lead lasted barely a minute with the golden boot of Argentina flyhalf Nicolas Sanchez levelling the score after a Matt Philip mistake from the restart.

Just as Kremer returned to the field, Hooper was sent to the bin for a similar offence after crunching Sanchez with a high shot.

It marked a momentum shift with the Pumas taking the lead when Domingo Miotti, on while Sanchez received attention, nailed a penalty after another Philip error.

Felipe Ezcurra then made a break down the blindside from a maul and set free winger Bautista Delguy, who fended off Hunter Paisami before diving over for their first try in three Tests.

Miotti converted to put then 13-3 in front until another Hodge penalty on the half-time hooter clawed back three points for the hosts.

Hodge booted another after the restart to reduce the gap but then Salakaia-Loto saw red for a dangerous tackle and it looked all over for the Wallabies.

But Australia refused to give up and Hooper barged over for a try from a lineout with Hodge converting to level the scores at 16-16 and set up an exciting finale.

We live in a world where facts and fiction get blurred
In times of uncertainty you need journalism you can trust. For only R75 per month, you have access to a world of in-depth analyses, investigative journalism, top opinions and a range of features. Journalism strengthens democracy. Invest in the future today.
Subscribe to News24
Related Links
Hundreds gather for 'warrior' Dominici's funeral
Div returns to rugby more politically correct: 'I've had time to reflect'
Pumas hold on to beat spirited Griquas
Next on Sport24
Vaipulu's late try puts Montpellier under 'serious' relegation threat