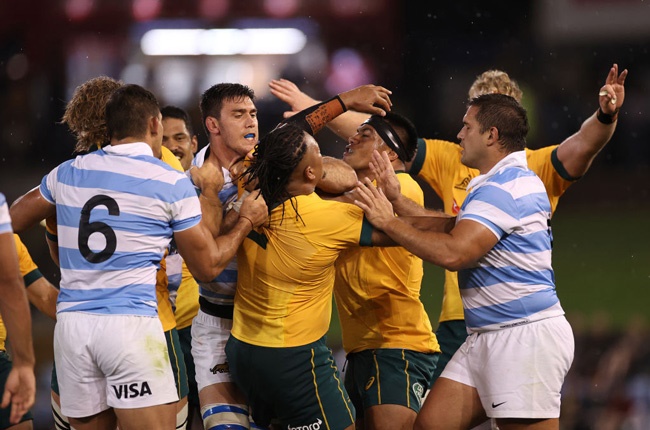 A courageous Argentina battled back to earn a brutal 15-15 Tri Nations draw with Australia Saturday and reinforce their credentials after an epic win against the All Blacks last week.

AS IT HAPPENED | Australia 15-15 Argentina

The Pumas looked in trouble when they slipped nine points behind in the second half at Newcastle, north of Sydney, but the golden boot of Nicolas Sanchez rescued them to keep the tournament wide open.

After his 25 points against New Zealand, he again bagged them all, with his Australian opposite number Reece Hodge missing a penalty in the dying minutes to secure a win for the Wallabies.

Mario Ledesma's side came into the match on a high after their first win against New Zealand in 35 years last weekend, and their passion and intensity again carried them through.

It left all three teams on six points on the Tri Nations ladder, but Argentina have a game in hand with a return clash next up against the All Blacks in a week's time before facing Australia once more.

Australian coach Dave Rennie kept the same backline that helped orchestrate their own upset of the All Blacks two weeks ago and, steered by No.10 Hodge, they once more ran the show at a sell-out McDonald Jones Stadium.

They dominated possession in the first half but were plagued by poor execution that saw two tries disallowed and other chances wasted.

Australia took a 9-6 advantage into the second stanza and stretched their lead to nine points, but the Pumas refused to give up.

The odds were always stacked against Argentina, who went into the game having lost 17 of their last 19 against the Wallabies, including 14 of the previous 15 in Australia.

But they were buzzing with confidence as they searched for a fourth win in five Tests.

Australia applied the early pressure and got the first points on the board with Hodge nailing his first penalty of the night after just three minutes, only for Sanchez to cancel it out almost immediately.

The Wallabies began stringing together attacking runs and exciting centre Jordan Petaia was desperately unlucky to have an acrobatic try disallowed after his foot strayed onto the chalk chasing a deft Hunter Paisami grubber kick.

Argentina were on the back foot, absorbing pressure as Australia dominated territory only for errors to creep in at critical times.

Ill-discipline cost them another penalty on 32 minutes against the run of play as frustration crept in, with Sanchez converting before Hodge levelled the scores.

It set up a frantic finish to the half as tempers frayed and scuffles broke out, with hulking Taniela Tupou and Sanchez among the culprits.

Wallaby Marika Koroibete had a try disallowed for a forward pass just before the break and their pressure finally paid off with Hodge kicking another penalty after the hooter for a 9-6 lead.

He bagged his fourth minutes after the restart as Pumas' hooker Julian Montoya was sent to the sin bin for persistent offending and made it five-out-of-five to further extend their lead as drizzle came down.

But the irrepressible Sanchez kept the Pumas in the hunt, booting three consecutive penalties to level the scores as the momentum shifted.

Hodge had a golden opportunity to win the game with two minutes left, but sent his kick veering off to the right.

We live in a world where facts and fiction get blurred
In times of uncertainty you need journalism you can trust. For only R75 per month, you have access to a world of in-depth analyses, investigative journalism, top opinions and a range of features. Journalism strengthens democracy. Invest in the future today.
Subscribe to News24
Related Links
Former Wallabies coach Michael Cheika takes charge of Lebanon
Rasool 'delighted' by inclusion of new WP Rugby board members
'Was he any good at cricket?': Wales debutant Botham at ease with famous name
Next on Sport24
WATCH | 'It’s a big day for Argentina rugby,' says heroic Matera after win over All Blacks