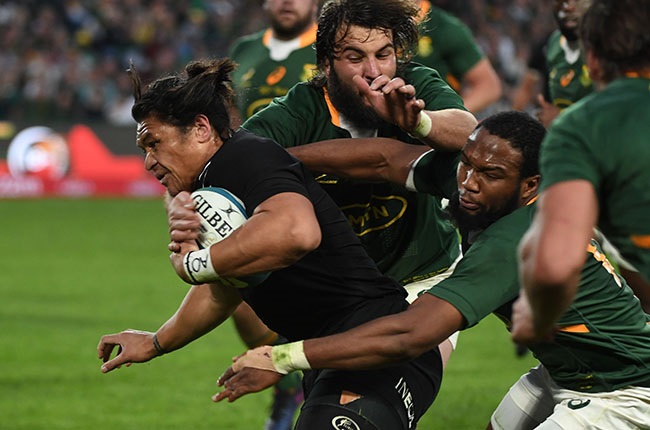 The All Blacks snapped a three-Test losing streak, stunning the Springboks at a packed and expectant Ellis Park | @Sbu_Mjikeliso #SAvNZ https://t.co/JhwtW7KhxH

The All Blacks dot down four times to beat the Springboks 35-23 and retain the Freedom Cup ??? pic.twitter.com/IxOkydk7xY

FT | The Freedom Cup is coming back to Aotearoa.

Two late tries from the All Blacks see them retain the Freedom Cup they've held since 2010.

The Boks did well to overturn a 15-0 deficit but they didn't hold their composure in the final 10 minutes when they led 23-21.

The Springboks slipped too many tackles and will rue their poor start. The wrong selection calls were made.

It's a very famous win for the All Blacks given the backdrop. And they deserved it for sure.

78'- TRY to the All Blacks as Scott Barrett goes over!

And that is game over.

77'- A great kick in behind by Jordie Barrett forces Willie le Roux to boot out near his own tryline...

Time is running out here for the Boks.

75'- Bok sub: Herschel Jantjies on at scrumhalf for Jaden Hendrikse.

73'- TRY to the All Blacks as David Havili rounds off a great team try!

72' - All Blacks on the attack after a run from deep inside their own half...

It's important for the Boks now to get ahead by more than a penalty-goal advantage...

70'- Another scrum penalty to the hosts. It allows Pollard to set up another lineout in NZ territory.

67'- But Handre Pollard slots the PENALTY to put the Boks in front for the first time in the game.

66'- YELLOW CARD for Beauden Barrett but referee Luke Pearce says it's not a penalty try. There was no certainty of a try... Hendrikse tried to scoop on a loose ball before he was taken out.

The All Blacks could be in trouble here as Jaden Hendrikse is taken out without the ball...

62'- A scrum penalty to the Boks allows Pollard to set up a lineout just inside New Zealand territory.

59'- Pollard nails the CONVERSON from out wide.

It came after a Bok turnover near the NZ 22m area. They swung it wide quickly before a great pass from Willemse to Mapimpi.

The officials determine there was obstruction as Whitelock was impeded and couldn't tackle Am.

This now results in a pretty easy shot at goal for Mo'unga.

However, the TMO is called into action for potential obstruction and a forward pass...

55'- TRY to the Springboks as Makazole Mapimpi goes over after taking a pass from Lukhanyo Am!

It was a great break from Am from inside his own half.

55'- Great defence from the All Blacks sees them win a vital turnover. Ardie Savea with some great work on the ground.

53'- But referee Luke Pearce goes back for a Bok penalty... the hosts set up an attacking lineout before the All Blacks transgress again.

The visitors are now on an official warning.

Replays show Lukhanyo Am had put a foot in touch out wide before he off-loaded. It was a strong run from Am but he off-loaded just too late...

The on-field decision is a try for Damian Willemse who landed on a loose ball.

47'- Silly from Jasper Wiese, who takes out Aaron Smith after the referee blows for a Bok penalty.

Luke Pearce then promptly reverses the penalty. And it's right in front for the All Blacks...

Pollard has now been successful with his past 14 kicks at goal.

44'- After relentless Bok attack, the All Blacks buckle and concede a penalty. It's in front for Pollard...

41'- The Boks win an early penalty at lineout time. It's on halfway and Pollard will set up a lineout deep inside NZ territory.

Welcome back for the second half!

The Boks kick off...

Johannesburg erupts as Lukhanyo Am and Handre Pollard cut down the deficit down to just eight points ??

A massive turnaround in fortunes in the last five minutes before half-time!

The Bok substitutions have worked wonders. Credit to the Bok coaching staff for thinking on their feet there.

40'- The Boks win a scrum penalty on the stroke of half-time. It's just inside their own half and Pollard will line up a shot at goal.