Springboks scrap, kick and claw their way to agonising All Black defeat 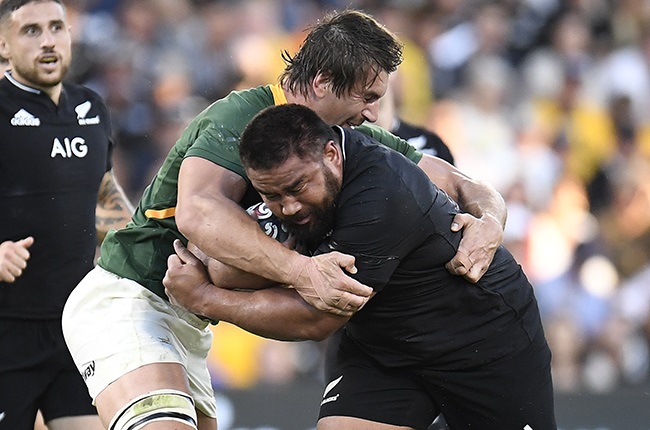 It was everything the history of this rivalry suggested it would be - intense and tight from start to finish - but in the end it was the All Blacks who emerged 19-17 winners over the Springboks in Townsville on Saturday.

This was the 100th meeting between these two great rugby nations, and it perfectly illustrated why they have shared such great mutual respect for a century.

AS IT HAPPENED | All Blacks 19-17 Springboks

When referee Luke Pearce blew the final whistle, both sets of players dropped to the turf, empty, after a clash that was brutal, scrappy and so very close.

There was a try each, but the boot of Jordie Barrett - he kicked five from five and a late, winning penalty - ultimately saw the Kiwis over the line.

The Springboks, under immense pressure from back home given their back-to-back losses against the Wallabies, were true to their game style despite the ongoing criticism.

They kicked - a lot - and relied on their set piece, defence and physicality for almost all of this clash.

The difference for them in the second half was their execution, where Faf de Klerk's box kicks were far more accurate, and it looked like the Boks would bash their way to what would have been a famous victory.

It was not to be, though, and with this win the All Blacks now wrap up the 2021 Rugby Championship title.

After the most animated and emotional Kapa o Panga haka performance you are ever likely to see, the stage was set.

The Boks had plenty to prove and were visibly up for it, but they were off to the worst possible start.

Missed tackles have crept into the South African game in this tournament, and that was the issue again when Codie Taylor broke through the defensive line after just a couple of minutes before releasing wing Will Jordan, who used his pace to finish off the move.

Jordie Barrett converted, and the hosts had a 7-0 lead.

Somehow, the Springboks got back just two minutes later in the most fortunate fashion when De Klerk launched a box kick that went way too long.

George Bridge was on hand to make what should have been a routine take, but he somehow dropped the ball and it fell perfectly for Sbu Nkosi, who went over.

Handre Pollard missed the conversion, but the Boks had limited the damage of that early blow.

Two moments of ill-discipline from New Zealand's Brodie Retallick - one for blocking a runner and another for illegal movement at a ruck - then gave Pollard the opportunity to slot consecutive penalties as the Boks went out to an 11-7 lead.

South Africa persisted with their kick-heavy game, even on the rare occasions when they were in the All Black half, but they were ultimately struggling to find territorial dominance as penalties also started hurting them.

Jordie Barrett narrowed the gap after one infringement to 11-10, but when Nkosi was yellow-carded on 35 minutes for a deliberate knock down with the All Blacks on attack, the resulting penalty saw the hosts move into a 13-11 lead.

There was plenty of All Black pressure before half-time, but the Boks scrapped and clawed their way through those testing minutes and got into the shed unscathed.

It was more of the same after the restart, with the All Blacks camped on the South African line. Their execution at crucial times let them down, though, and again the Boks survived as Nkosi returned to the field.

On a rare trip into the All Black half, the Boks were then awarded another penalty 40m out for a New Zealand offsides and Pollard stepped up to calmly slot his third of the night.

The Boks were 14-13 up, but that lead was short-lived as Jordie Barrett made it 16-14 on the hour mark after Lood de Jager had drifted offside.

Not once, even with the game hanging in the balance, did South Africa change their philosophy. It remained a case of looking to dominate physically, but in the last quarter of the game the execution was there in the set piece and kicking accuracy.

A Pollard penalty on 66 minutes restored the Bok lead as the All Blacks started making simple errors by their high standards, and the intensity and accuracy after that was good from the visitors.

It looked like the Boks had done enough, but New Zealand were awarded a penalty in the 77th minute from wide left and around 45m out.

Barrett, once again, was ice cool. The ball sailed through the posts, and while the Boks had time for one more attack after that, it was not to be.