All Blacks haunted by history 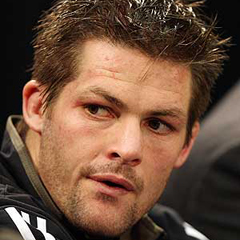 Auckland - Les Blues are the betes noires of the All Blacks when it comes to the Rugby World Cup and that has the All Blacks on edge going into their pivotal Pool A match here on Saturday.

No matter that the All Blacks have been the top-ranked side in the world longer than all other nations combined, and have the best winning record of all teams including an overwhelming 36 wins, 12 losses and a draw against France.

At the World Cup the ledger is even with two wins each from four encounters, and it is the two losses the New Zealanders find demoralising.

It started with their 43-31 win in the semi-finals of the 1999 World Cup and was exacerbated by the 20-18 result in 2007 when France made sure the All Blacks did not progress past the quarter-finals for the first time.

Even the All Blacks only time as world champions, beating France 29-9 in the 1987 final does not figure as a central talking point.

Coach Graham Henry, who was also in charge in '07, was blunt when assessing the task ahead.

"History shows the challenge," he said, acknowledging the shock result four years ago saying it caused "a lot of pain for some people, they don't want to go through that pain again."

"It's not rugby business for the All Blacks but a question of defending our land," said the 34-year-old who is now playing for French club Stade Francais.

The inaugural World Cup final was played at Eden Park, scene of Saturday's encounter, and was won convincingly by the All Blacks 29-9 which included outscoring France three tries to one.

Grant Fox landed a drop goal to give the All Blacks an early advantage and converted a try by standout loose forward Michael Jones to establish a 9-0 lead by half-time.

A Didier Camberabero penalty put France on the board at the start of the second half before the All Blacks responded with tries to David Kirk and John Kirwan and with the accurate kicking of Fox they led 29-3 before a consolation late try to Pierre Berbizier converted by Didier Camberabero .

Arguably one of the greatest games in World Cup history and won by France 43-31 after they had been written off before the game and the All Blacks were overwhelming favourites to go on and win the Webb Ellis Trophy a second time.

The All Blacks raced to a 24-10 lead before France ignited the Gallic flare that had been missing for so long and ran up 33 further points to stun the All Blacks whose composure fell apart as the score mounted against them.

Christophe Lamaison, a late addition to the side following the late withdrawal of the injured Thomas Castaignede, proved to be the star of the match scoring the opening French try and landing four conversions, three penalties and two drop goals.

The third-place play-off is a match neither side wanted especially as it followed the bitterness of not making the finals. The All Blacks had been beaten in the semi-finals by Australia and France lost to England.

In a match without passion, the All Blacks scored six tries to one to beat France 40-13.

As so often happens the All Blacks started the World Cup as undisputed favourties and waltzed through pool play unbeaten while France were beaten by Argentina 17-12 to become the first host nation to lose a group match.

But the French did not read the script and after trailling 0-13 after 30 minutes they fought back to win 20-18 and inflict another early exit on the All Blacks.

As pressure built during the second half, France levelled at 13-13, before the All Blacks regained the lead with a try to Rodney So'oialo.

With just over 10 minutes to play, Frederic Michalak came on for France and immediately created a try for centre Yannick Jauzion which Jean-Baptiste Elissalde converted and France were in command.

Although the All Blacks dominated territory and possession in the final 10 minutes they wanted a try and refused to take possible drop goal attempts which could have won them the game.

We live in a world where facts and fiction get blurred
In times of uncertainty you need journalism you can trust. For only R75 per month, you have access to a world of in-depth analyses, investigative journalism, top opinions and a range of features. Journalism strengthens democracy. Invest in the future today.
Subscribe to News24
Related Links
Minnows closing the gap
Boks do the 'Mbombela Jive'
Next on Sport24
England's Moody admits error