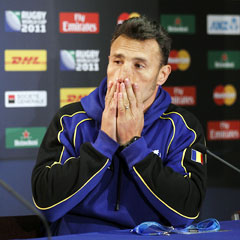 Auckland - The first ever Rugby World Cup clash between two teams from eastern Europe will see old foes Georgia and Romania both out to grab the win that will turn tournament failure into success.

For Romania, it will be the last chance they have following Pool B defeats at the hands of Scotland, Argentina and England, and coach Romeo Gontineac knows what to expect from their near neighbours.

"We play them all the time, so it is our final. We play every year. We win, we lose, it is our level. England, we never expected to win. Georgia is our level. It is our priority," he said.

Scrutiny of recent encounters between the two sides show that Georgia start as slight favourites as they have won four out of the five games the two countries have played since the last World Cup in 2007.

They have supplanted the Romanians as the top team in the second division of European rugby and are now ranked 16th in the world, two ahead of their rivals.

On top of that, Georgia have been the more impressive side in New Zealand, dropping a close one 15-6 to Scotland before giving England a hard time of it till they ran out of steam in the second half of their match in Dunedin.

Georgia's Scottish coach Richie Dixon said he had been impressed with the Romanian performance against Scotland when they led deep into the match before shipping two tries inside the final 10 minutes.

"Both teams know how important this game is back home. They don't want to disappoint the people watching," he said. "It comes down to who is smarter on the day and who gets on the front foot.

"Our packs are very similar in the line-up and it all depends on when we get our ball and how we use those opportunities."

Dixon believes that both sides have proved during this World Cup that the gap is closing between the top-tier teams and the second-rankers, and that they have a duty to put on a top display in the match at Palmerston North.

"What's most important for this match is we don't let our standards fall. They're in the process of earning respect and they're doing that here," he said.

Romanian hooker and skipper Marius Tincus, who returns to the starting line-up for his 50th cap after being on the bench for the 67-3 loss to England, said he expected a tough, physical encounter.

"This is the final game of the Rugby World Cup for us," he said.

"This is our objective - to beat Georgia - so we will do everything in our power to obtain this. It is a very important match for both teams. It will be a very hard match. The last man standing wins."

The Romanians have made 10 changes to the side that lost to England and will send out the same starting line-up that took on Scotland.

Georgia have made three changes to the team which went down 41-10 to England with David Zirakashvili, Giorgi Chkhaidze and Lasha Khmaladze promoted to the starting line-up.