Dupont a shining light for France despite World Cup heartbreak 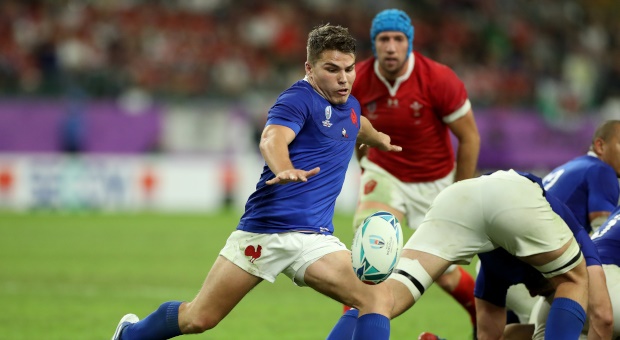 Antoine Dupont of France kicks the ball upfield during the Rugby World Cup 2019 Quarter Final match between Wales and France at Oita Stadium on October 20, 2019 in Oita, Japan. (Photo by David Rogers/Getty Images)

Oita - One small consolation for France in their agonising 2019 World Cup quarter-final loss to Wales on Sunday was the form of Antoine Dupont.

It was easy to overlook the scrumhalf's contribution as France let slip a 19-10 half-time lead in Oita after Sebastien Vahaamahina was sent off.

But in the early stages the 22-year-old Dupont, making just his 10th Test start, directed play with the assured touch of a veteran, putting in some steadying box-kicks as he chivvied the experienced forwards in front of him.

And if he wasn't kicking well out of hand, Dupont's quick and accurate passing kept France on the front foot against a Wales defence missing Jonathan Davies after the centre was a late withdrawal due to a knee injury.

No mention of Ntamack is complete without pointing out he is the son of former France wing Emile Ntamack.

But that could yet change over the course of his career, with both Dupont and Ntamack displaying sublime handling skills in the build-up to France's second try in a sensational opening eight minutes that ended with flanker Charles Ollivon going in between the posts.

The blots on an otherwise first-half display came with Ntamack seeing both his attempted conversion of Vahaamahina's opening try and a 38th minute penalty hit the post, with those five spurned points proving crucial at the finish.

France still led 19-10 at the break but they had been 16-0 ahead at half-time before losing 24-19 to Wales in a Six Nations match in Paris in February.

Ntamack was unable to atone for his earlier misses after veteran coach Jacques Brunel replaced him at half-time with Camille Lopez.

France were still nine points ahead when Vahaamahina was sent off in the 49th minute for a blatant elbow to the head of Wales flanker Aaron Wainwright.

They now faced the daunting task of having to play the closing 31 minutes a man down.

Dupont, however, then showed his pace and strength with a sniping break off a ruck that set up good field position for France.

But moments after he had been replaced by Baptiste Serin, France lost control of a scrum ball near their own line, with Ross Moriarty plunging over for a converted try that put Wales ahead with six minutes left.