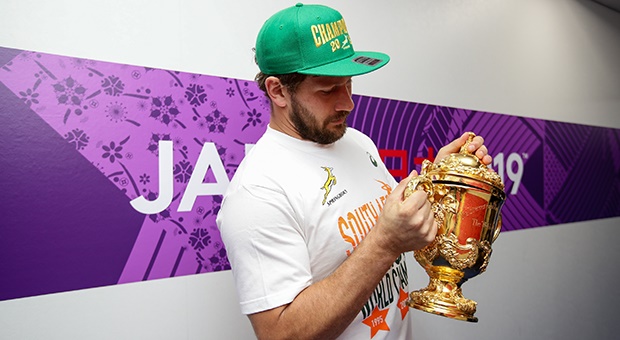 Cape Town - Frans Steyn says he does not know what his Springbok future is.

The 32-year-old is the second South African after Os du Randt to have won two Rugby World Cups having lifted the Webb Ellis Cup in 2007 under Jake White and then again in 2019 under Rassie Erasmus.

"I don't know ... I'll have to wait and see," was his response when asked by Sport24 on Monday if he would be seen in a Springbok jersey again.

The Boks have been on a five-day long trophy tour around the country that has seen them visit Johannesburg, Pretoria, Soweto, Durban, East London, Port Elizabeth and Cape Town.

The tour was incredibly well supported in every city with an overwhelming sense of unity evident along every route.

"It's nice seeing the country like this," Steyn said.

"I think Rassie and them have a plan to keep that (unity) in place going forward.

"I really enjoy Rassie and the coaching staff. They're honest and they know what they're doing."

Steyn has played 67 Tests for the Boks since making his debut all the way back in 2006.

We live in a world where facts and fiction get blurred
In times of uncertainty you need journalism you can trust. For 14 free days, you can have access to a world of in-depth analyses, investigative journalism, top opinions and a range of features. Journalism strengthens democracy. Invest in the future today. Thereafter you will be billed R75 per month. You can cancel anytime and if you cancel within 14 days you won't be billed.
Subscribe to News24
Related Links
FACT: Rassie now 'loses control' of most top Boks
Traditional SA recipe won World Cup for Boks - Visagie
Rassie, Siya and Chester honoured at SA Sports Awards
Next on Sport24
SA Rugby boss on turnaround: 2016 was our darkest period