Japan 'aiming beyond' quarter-finals at RWC 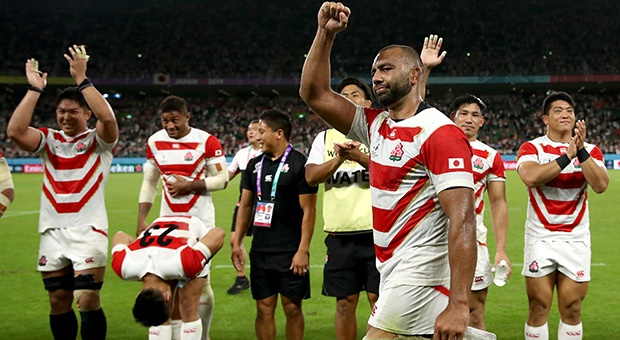 Tokyo - Japan have publicly set themselves the target of reaching the Rugby World Cup quarter-finals - but privately the tournament hosts have far loftier goals.

Yuichiro Fujii, Japan's technical chief, insists the Brave Blossoms are looking to go even deeper if they reach the knockout stage for the first time.

Jamie Joseph's side have won three games, including a stunning 19-12 upset of Ireland, to top Pool A and if they can clinch one of the two quarter-final spots they would likely face South Africa or defending champions New Zealand.

While few would expect them to progress any further, Fujii told Japanese media on Monday: "Our target is the last eight but we're aiming beyond that. If we finish top, we probably get South Africa. The coaching staff are looking at how we can bump them off."

Once tournament pushovers, Japan famously caused one of sport's greatest shocks by toppling two-time champions South Africa 34-32 at the 2015 World Cup - an astonishing result that was recently made into a movie called "The Brighton Miracle".

But the Springboks pummelled the Japanese 41-7 in a World Cup warm-up game in Kumagaya last month in their first meeting since that humiliating loss on the English south coast.

Japan lock Uwe Helu insisted Monday that the Pacific Nations champions still had to complete the job by beating Scotland this weekend in the biggest game in the country's rugby history.

"Of course there's pressure and for me what we've been doing so far is not going to be good enough," said the beefy second row. "We need to be great."

If Japan advance, they would play their quarter-final in Tokyo on October 19 or 20.

We live in a world where facts and fiction get blurred
In times of uncertainty you need journalism you can trust. For 14 free days, you can have access to a world of in-depth analyses, investigative journalism, top opinions and a range of features. Journalism strengthens democracy. Invest in the future today. Thereafter you will be billed R75 per month. You can cancel anytime and if you cancel within 14 days you won't be billed.
Subscribe to News24
Related Links
SA v Canada: A big barney … and Barney’s debut!
English ref for Springboks v Canada
Rugby a sport of 'intimidation', says All Blacks' Hansen
Next on Sport24
SA Rugby boss on turnaround: 2016 was our darkest period