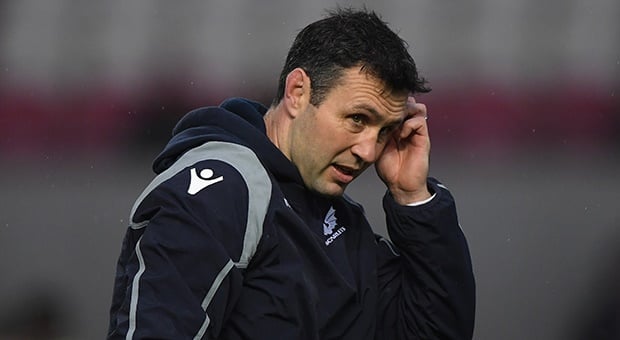 Jones, who was due to replace Howley after the World Cup, has minimal time to prepare after Warren Gatland's long-time attack coach flew home to face an investigation.

But Jenkins insisted Jones, the former Wales and British and Irish Lions flyhalf, was slotting right in ahead of Wales's Pool D opener against Georgia on Monday.

"The good thing with Steve is that he was a world-class player - he is doing exceptionally well as a coach, too, and he's been in this environment before," Jenkins said.

"He pretty much knows how it works. He's a fantastic person and I think he knows a lot of the systems we play and he will get into it pretty quickly.

"Pretty much everything has been put in place for Monday - it has been for some time - and we are ready to rock on that. We will just keep moving forward."

Howley's departure sent shockwaves through the Wales camp, where he has been a fixture since 2008 and an integral part of their success under Gatland.

"It is obviously very difficult. He (Howley) is a very close friend of mine. It's not ideal, but it is what it is. It's happened and we have to move forward," Jenkins said.

"Steve has arrived here now and he is a good man as well. The boys have trained well. It's the same as anything - the show goes on, and we have got to look forward and try and put it behind us."

We live in a world where facts and fiction get blurred
In times of uncertainty you need journalism you can trust. For only R75 per month, you have access to a world of in-depth analyses, investigative journalism, top opinions and a range of features. Journalism strengthens democracy. Invest in the future today.
Subscribe to News24
Related Links
Ireland v Scotland a game for two halves, says Schmidt
NFL star Brady backs the Springboks for RWC glory
Boks, All Blacks: How much sting off the splinters?
Next on Sport24
SA Rugby boss on turnaround: 2016 was our darkest period