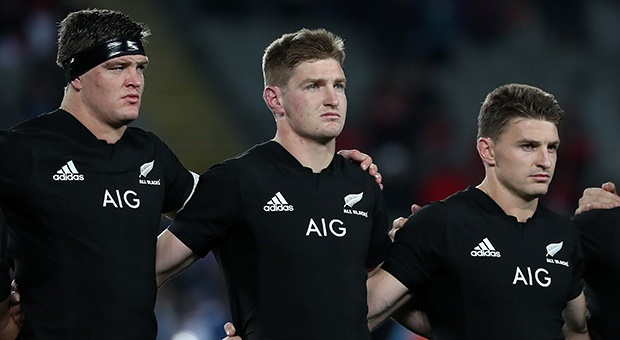 Tokyo - Beauden, Scott and Jordie Barrett are the first sibling trio to play together for the All Blacks, but fraternal rivalry has been shelved in Japan as they help New Zealand claim a third successive Rugby World Cup.

That rivalry, Beauden explained, would no doubt rear its ugly head when the trio resumed their knock-about games of cricket on the family dairy farm in New Zealand's North Island province of Taranaki.

"We're all pretty competitive," acknowledged Beauden Barrett, at 28 the eldest of the trio with Scott 25 and Jordie 22.

"But you'd probably find more rivalry on the back lawn at home in the summertime playing backyard cricket than you would in camp.

"We all play in different positions so it's hard to compare. Ultimately we're trying to do the best for the team in our roles."

"Jordie's a psycho because he's been bullied by Scooter (Scott). Scooter's the one who's nice and calm," he said.

"Baz (Beauden) is in between, he does lose it now and again but he does have that calmness about him."

Coles immediately jumped back in on Jordie: "We play a bit of darts in the team room, and Jordie loses the guts if he throws a bad dart, he's a psycho, a psycho!"

All three Barretts were named in Steve Hansen's side to face England in Saturday's World Cup semi-final in Yokohama, with Beauden and Scott starting while Jordie is on the bench.

Jordie admitted that their father, Kevin 'Smiley' Barrett, a former Hurricanes and Taranaki lock/flank, would likely try to pass on some top tips to Scott, picked at blindside.

"I'm sure he'll try to add his 10 cents in the next couple of days," Jordie Barrett said.

"As long as he doesn't follow some of dad's tactics from 1998 - you probably can't get away with now!"

Beauden Barrett roomed with Jordie last week, but has found himself with Scott this week, for the first time since 2002.

"It's great to room with him, he's clearly got his rugby head on because the other night he was sleep-talking and was calling out line-out moves."

With Richie Mo'unga starting at flyhalf, Beauden Barrett has slotted into a free-roaming fullback role such is his versatility, an attribute obvious in all the Barretts.

"As a back the skill sets required from a 10 or 15 are pretty similar," Beauden said.

"As for Jordie, he can cover the midfield too probably because of his size and physicality."

Scott is the biggest of the three and is usually a second-row forward.

"Because of his skill set, his good handling skills and ball carrying ability, he can probably play six (blindside flank) well too," said Beauden.

"We take a lot of pride every opportunity we get to put the black jersey on. We're lucky to get another one this weekend and obviously it's a pretty big game."

The Barretts have had to contend with the death of their grandfather Ted into the run-in to the quarter-final last week, saying it was good timing to have their father out in Japan for mutual support.

"Last week was a tough week for him (father Kevin) and for ourselves," Beauden Barrett said, adding that it was "awesome" to share the victory over Ireland with him.

"He's called 'Smiley' for a reason. That grin of his comes out quite often, it's always good to see. He's a proud dad."

Turning to Saturday's semi-final, Barrett said it was all about the feel-good factor.

"We have to remind ourselves before the game as the pressure comes on to take a moment to realise where you are, that you're playing a game you love. Enjoying those moments is so important," he said.

"If we play well it helps with that factor but at the end of the day it's just a game and we're out there giving it our best and hopefully having fun doing so."

Related Links
All Blacks coach dismisses England spy claim as 'clickbait'
Blow for Boks as Kolbe misses Wales semi-final
Boks to focus on own game, not referee Garces
Share
Next on Sport24
SA Rugby boss on turnaround: 2016 was our darkest period