SA Rugby boss on turnaround: 2016 was our darkest period 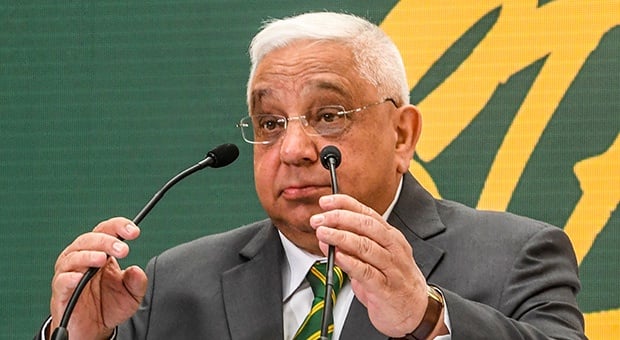 Cape Town - With the Springboks crowned world champions in 2019, it is easy to forget how far they had fallen over the last four-year cycle since the 2015 World Cup.

For current SA Rugby president Mark Alexander, the game in South Africa reached its "darkest period" in 2016 and most of that had nothing to do with results.

That was the year when then-president Oregan Hoskins resigned from his role in shocking fashion and was replaced in an interim capacity at the time by Alexander.

The disruption in leadership was only one element.

Following the 2015 World Cup, SA Rugby was also in the spotlight after being criticised both publicly and at government level for not showing signs of transformation under coach Heyneke Meyer at the tournament.

There were also administrative concerns surrounding the financially stretched Southern Kings at the time, and it all painted a picture of an unstable organisation and uncertain times ahead.

Perhaps the biggest blow to SA Rugby had come near the end of 2015 when ABSA and BMW both pulled their Springbok sponsorships to cost the organisation around R130 million, Alexander confirmed to Sport24 on Wednesday.

What happened on the field, of course, did not help matters either with new coach Allister Coetzee stumbling through his first year in charge in 2016 with a loss to Italy at the end of the year the obvious lowlight.

By then, public and corporate confidence in the Boks and SA Rugby had reached an all-time low.

"From January to June in 2017, we targeted around 480 CEOs nationwide," Alexander said of his team's efforts to resuscitate South African rugby.

The two major sponsorship signings during that time were MTN and FNB at figures reported to be around R50 million and R20 million per year each, respectively.

Both companies were given space on the Bok jersey.

2016 was also the year that sports minister Fikile Mbalula banned several federations, including SA Rugby, from bidding for or hosting major events because they had failed to meet their transformation targets.

Alexander says that the relationship between SA Rugby and government is now strong, and much of that has to do with the fact that Bok coach Rassie Erasmus has made transformation a priority in 2018 and 2019.

In this year's World Cup final, the Boks fielded five black Africans in the starting XV including captain Siya Kolisi.

"People think we prioritise transformation to give black players opportunities, but it is about more than that," Alexander said.

"Black players make up 80% of our pool, so if we don't take transformation seriously, we will have no rugby by 2030. It's about survival."

The obvious area of focus is the Eastern Cape, where Alexander is incredibly proud of the work done by SA Rugby and their academies in the region over a five-year period from 2013-2017.

"Those academies (which also extend to George and Boland) have seen 80 people play senior, professional rugby in that time and they have produced four Springboks," he said.

The major stumbling block to player development in the Eastern Cape, Alexander adds, centres around access to quality nutrition and gyms.

"The passion is there and that is clear ... but there is only so much we can do alone."

The key now is to build on the 2019 World Cup success.

Alexander describes SA Rugby's finances as "stable", but on January 16 and 17 the organisation will hold a workshop to explore avenues of maximising this moment both commercially and on the field.

"We want to use this success to help generate funds down to the unions," he said.

"Rugby can be a vehicle for social cohesion if done the right way, and that is what we are trying to do."

Alexander admitted that it would have been "incredible" for South Africa to host the 2023 World Cup now that they are champions, but the country lost out to France in shocking fashion back in November 2017.

The difficulty in bidding for 2027, Alexander says, is financial.

"We are a stretched economy and if we were to bid for 2027 then government would have to spend money on upgrading infrastructure that it doesn't have," he said.

We live in a world where facts and fiction get blurred
In times of uncertainty you need journalism you can trust. For 14 free days, you can have access to a world of in-depth analyses, investigative journalism, top opinions and a range of features. Journalism strengthens democracy. Invest in the future today. Thereafter you will be billed R75 per month. You can cancel anytime and if you cancel within 14 days you won't be billed.
Subscribe to News24
Related Links
Lyon's ex-All Black Ngatai wary of 'massive' Leinster test
James Dalton: I'm proud to be a Springbok again
Montpellier say au revoir to Bok prop, paves way for Lions move
Next on Sport24
James Dalton: I'm proud to be a Springbok again