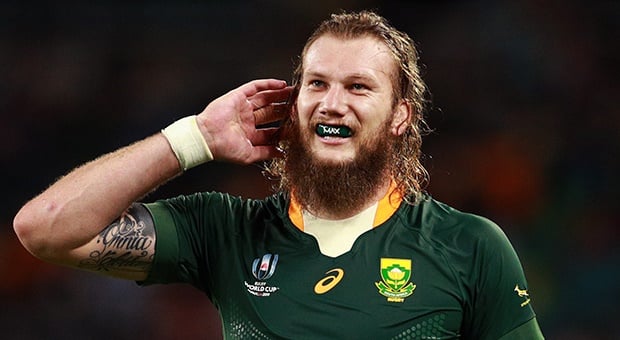 Irish media reports indicated earlier this week that the duo would join the Irish PRO14 outfit.

Van Graan, a former Springbok assistant coach, told the Pundit Arena website that they were in "advanced discussions" with both players.

"But there are no contracts signed at this stage. We are confident there will be a commitment in the future, subject to conditions, but at this stage no contracts have been signed and we have nothing official to confirm," Van Graan said.

The Irish Times reported on Monday that De Allende was set to sign a two-year deal with Munster ahead of the 2020/21 season.

The burly midfielder will be unavailable for the Stormers' Super Rugby campaign until next May as he will be playing for the Panasonic Wild Knights in Japan.

Meanwhile, the Irish Independent reported that lock Snyman would join Munster ahead of the 2020/21 season.

He will also spend time in Japan with the Honda Heat, before making a switch to Ireland, the report added.

Both De Allende and Snyman were instrumental in South Africa's World Cup triumph in Japan.

De Allende was a menace with ball in hand and scored tries in the playoff victories over Japan and Wales, while his work rate on defence proved invaluable.

Snyman was mainly used as a substitute but proved his worth when he came on in the second period of the knockout games.

We live in a world where facts and fiction get blurred
In times of uncertainty you need journalism you can trust. For only R75 per month, you have access to a world of in-depth analyses, investigative journalism, top opinions and a range of features. Journalism strengthens democracy. Invest in the future today.
Subscribe to News24
Related Links
Siya: I begged Rassie to lift trophy with me
3-man panel to review Wallabies' World Cup flop
How Bok star Kolbe shrugged off 'lack of size' critics
Next on Sport24
SA Rugby boss on turnaround: 2016 was our darkest period