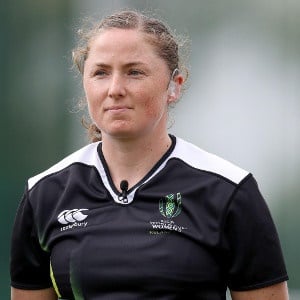 This comes after she was recently named on the World Rugby referee panel for the biggest women’s international season yet.

Barrett-Theron has also been appointed to take charge of the Test between England and Ireland at Twickenham on Saturday, November 24. She is the only South African on the referee panel, which includes referees from England, Ireland, Italy and France.

A total of 15 women’s Test matches are scheduled to take place between November 3 and 27, with the matches being hosted across eight countries, namely the USA, England, Spain, France, Italy, Scotland, Ireland and Wales.

Included in this exciting women’s season, are three Springbok Women’s Tests against Wales, Spain and Italy on November 10, 17 and 25 respectively. These matches will be refereed by Nikki O'Donnell (England), Clara Munarini (Italy) and Aurelie Groizeleau (France) respectively.

Barrett-Theron’s appointment for the November Women’s Internationals follows on another significant moment in her refereeing career in August in which she took charge of her first Currie Cup First Division match between the SWD Eagles and Leopards in George.

Related Links
Juan de Jongh: WP the favourites, but...
John Smit on where Currie Cup final will be won
A history of WP v Sharks Currie Cup finals
Share
Next on Sport24
Racing worries over Euro final after virus outbreak