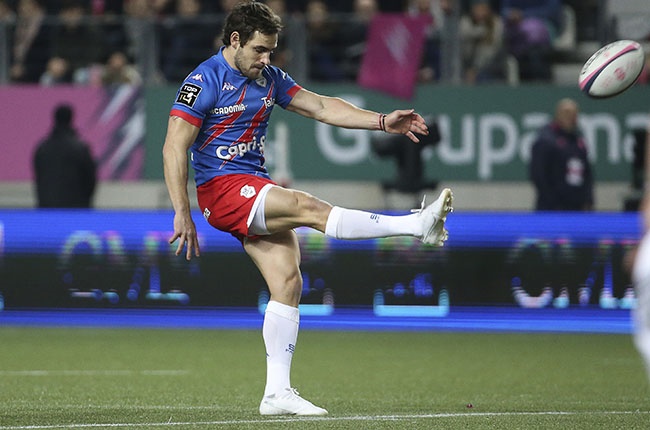 Argentina flyhalf Nicolas Sanchez scored 14 points in a 22-16 victory over Castres described as "extraordinary" by Stade Francais head coach Gonzalo Quesada in their first game of the French Top 14 season.

The Parisians were forced to postpone last weekend's match against Bordeaux-Begles due to a lack of fully-fit front-rowers who suffered lung damage after contracting coronavirus.

"Frankly, it's extraordinary what the team did tonight. The guys deserve the win," said Quesada, who returned to the French capital during the summer after leaving in 2017.

"We showed great spirit, solidarity. Away from home you have to depend on your breakdown work, defence, and the two worked well enough," he added.

Quesada, who won the Top 14 and the European Champions Cup in his previous spell in charge, handed debuts to close-season arrivals including Pumas flanker Marcos Kremer.

Mauricio Reggiardo made six changes from victory at Agen on the opening weekend as try scorers scrum-half Rory Kockott and winger Filipo Nakosi kept their places.

Argentina's Urdapilleta claimed the advantage for his side a quarter of the way into the match as he converted his own try despite the video referee looking at a possible block by centre Yann David.

Two minutes later Sekou Macalou crossed and the Parisians were back ahead 16-10 thanks to Sanchez's conversion.

Sanchez and Urdapilleta then kicked a penalty goal each and the away side were 19-13 up at the break.

Urdapilleta kept his form by slotting his third penalty four minutes into the second half before the home side's Nakosi made a try-saving tackle on the Arthur Coville to keep the score at 19-16.

The side from the capital were down to 14 men with a quarter of an hour to go as captain Paul Alo-Emile was shown a red card for leading with his shoulder into a tackle.

Replacement Joris Segonds then re-established the six-point lead with his first penalty of proceedings before Nakosi was denied a potential match-winner.

The Fiji winger charged through the Parisian defence but knocked the ball on as he crossed the line in the corner with six minutes to play.

Reggiardo's men pressed forward with countless phases inside the opposition 22 but Macalou was first to a ruck and won a penalty to claim the victory in his side's first game since 1 March.

We live in a world where facts and fiction get blurred
In times of uncertainty you need journalism you can trust. For only R75 per month, you have access to a world of in-depth analyses, investigative journalism, top opinions and a range of features. Journalism strengthens democracy. Invest in the future today.
Subscribe to News24
Related Links
Lukhanyo Am to captain inexperienced Boks in Rugby Championship?
Bulls show the way in harnessing power of club rugby
New dawn for Wallabies with 16 uncapped players in bumper squad
Next on Sport24
World Cup final hurt driving on Eddie Jones