Blitzboks fight hard to down Ireland at London Sevens 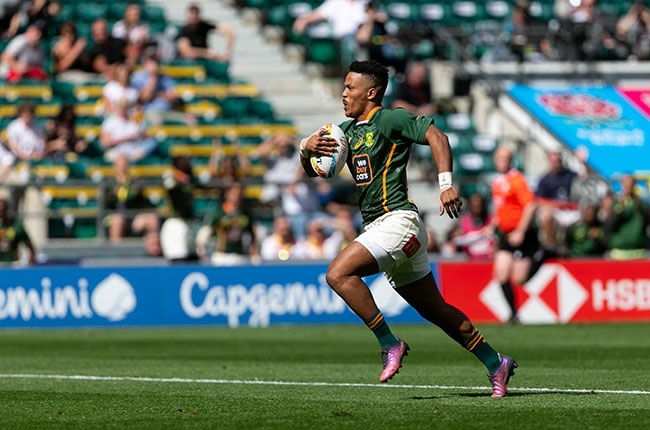 The Blitzboks have gone two from two in the London Sevens as they defeated Ireland in their second Pool B encounter at Twickenham on Saturday.

As it happened | London Sevens

Earlier on Saturday morning, the Springbok Sevens side sealed an opening 26-19 win over top-seeds Argentina.

Neil Powell's charges scored three tries to win 19-12 against the Irish after leading 7-0 at half-time.

It was an enthralling first half with neither teams giving much away, but moments leading up to half-time, Zain Davids broke the deadlock with a try in the right corner. Ronald Brown made no mistake in converting the try and saw South Africa take the lead.

In the second half, Ireland fought back as Jordan Conroy crossed the whitewash with Billy Dardis levelling the scoreboard.

However, the Blitzboks' defence broke with Terry Kennedy giving the Irish a lead with a splendid try.

After Muller du Plessis' try was disallowed, the Springbok Sevens continued to fight and a loss of the ball saw Mfundo Ndhlovu score a try and Brown slotting the conversion to give South Africa the lead.

Momentum was on the South African side as Angelo Davids scored to hand the Blitzboks a win and go on top of Pool B.

The Blitzboks will tackle Kenya in their final pool match on Saturday (17:08 SA time).

We live in a world where facts and fiction get blurred
In times of uncertainty you need journalism you can trust. For 14 free days, you can have access to a world of in-depth analyses, investigative journalism, top opinions and a range of features. Journalism strengthens democracy. Invest in the future today. Thereafter you will be billed R75 per month. You can cancel anytime and if you cancel within 14 days you won't be billed.
Subscribe to News24
Next on Sport24
Blitzboks off to a much-needed winning start as they down top-seeded Pumas at London Sevens

Get the newsletter
Voting Booth
Would you be keen to see the Springboks join the Six Nations?
Please select an option Oops! Something went wrong, please try again later.
Yes! The Northern Hemisphere is the future.
53% - 3583 votes
No! The Rugby Championship is still the pinnacle.
47% - 3197 votes
Previous Results
Showmax
The story of a legend: Sir Alex Ferguson